It was a massive honour to return to Madrid last weekend to attend the wedding of my dear friends Francisco and Ruth. Nobody here will be unaware of how much I thrive on visiting that place or my tireless evangelism in trying to get people to go there, to experience the experience for themselves. So I hit the city running and pretty much never let up. A nonstop whirl with great, great people. Basking in the company of “weel ken’t” amigos and others I was just meeting for the first time. 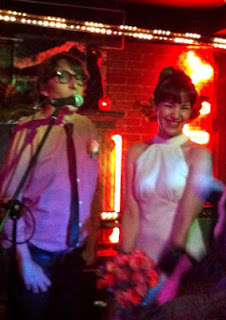 The shindig took place at Templo Del Gato – “A California Music Bar” where the primo couple met. Calling the TDG that is to hide its light under the proverbial bushel. The scope of music is wide and deep but it’s all good. Cracking joint. After a sumptuous meal at Cuidad De Tui, a reconnaissance squad headed over there to check it out and stayed until chucking out time.
The night wasn’t quite over though and after considerable arm twisting (not) I cajoled mi amigo and Hi-Riser, Todd Bradley of Rochester NY to join me at the one and only Wurlitzer Ballroom. We left there pretty late but it marked my return to the city that truly never sleeps except for a wee afternoon siesta here and there.
Up bright(ish) and early for breakfast and out into the air. The weather had taken a turn for how it is at home so there was some shower-dodging. Took the day pretty easy and by the time it was time to head toward the wedding all the cobwebs had been dispatched. Ms Laura introduced me to a cracking wee local haunt for an aperitif or 3. There had been a big football game the night before and some excitable fans added colour to our experience. They were taking photos of the scenes on TV. !?  Bless.
We arrived at the party hq, met up with everybody and proceeded to have a damn fine time until closing. Once again, all roads – for 4 of us at least, led to Wurlitzer and we left that hallowed portal around 6.30am. My plan of getting a slice of pizza on the way back to the hotel was thwarted by a pincer movement of hookers on what Brother J calls Calle De Cho Cho (Right BB?). The only proposition I was really interested in was topped with pepperoni at that juncture. Anyway, it was a fine night with much quaffing and dancing and good natured rowdiness. 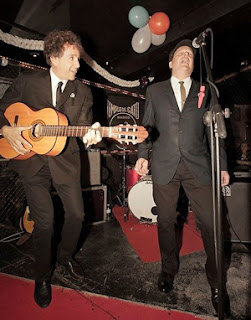 And the band wasn’t just any old combo... I always liked the Hi-Risers records but the live experience is so much more. Belonging to the lineage of your NRBQ/Skeletons timeless American music axis, their grasp on finite pop that is more dna than roots. That US twist on anglophilia that boots it back overseas with a damn sight less starch or chin-stroking. This ain’t a formula, it’s a heart and soul with kitchen sink mission. The addition of Jose (El Niño) Bruno from Spain invigorates the sound yet further and this was his first “show”. It was a gas being able to spend time with Greg and Todd, talking about how their first band had their first show opening for New Math and how the Rt Hon. Duane Sherwood was the Technician at their school.
So anyways, Sunday was a little hazy but I had to be compos mentis to meet up with Sir Marco Padin of that fine imprint known as Ghost Highway Recordings. He specialises in high quality gear and has to date put out 63 releases in a very short space of time. Check out his wares here. Another cool wee hostelry was found to hang in and that’s exactly what we did. Was supposed to maybe go see Spectrum at El Sol but ended up having dinner at a place recommended by the lady on reception at the hotel. It looked swanky and it was but it wasn’t expensive.
And then we were back in the Wurli. It was quiet and Inigo and Pedro Temboury, a man that was familiar with my output over the years and a friend showed up. That was pretty crazy but big fun. Pedro is a film-maker and I just watched a short piece called Psycho-Lettes that is not for the faint of heart. I'll post the link here after I have a look at some more of his screen antics.

Which left the last day to meet Ms Marcela, head over to Munster, see Helena, Alvaro and Benito in a non-W environment and then hang with La Hembra Alfa for a bit. She took me to La Buena Vida, a great bookshop with a wee bar that serves Pacharán then off for some old school tapas in the form of Spanish omelette and callos at a "bar de viejo". The texture of the latter wasn’t doing it for me though but I dug the Jay Z’s (wee tumblers of beer). They’re actually called “cana’s” but that’s close to Kanye, right? And voila you got some distant urban connection slang. At least on my telly. And they're very easy to "caw" back.
My Rochester friends and I retired to the place we’d made our local and had two or three for the road. And then it was nearly time to leave the magic city but not before meeting Ulla for our customary morning coffee. Soon it was time to head for the hangar and thusly back into the jaws of reality. Absolutely cream-crackered, I bid Mad-Town adios for the time being but I shall return. And soon but I don’t want to be wearing out my welcome...
And after a stint at the day prison, the following evening found me in Auld Reekie – some considerable distance from my preferred “Kansas”. No “Carry On My Wayward Son” jokes please...
It wasn’t Chrysta Bell’s fault that I was suffering from Mad-lag and I should have given into the voices from the sofa but in the tradition of not wanting to miss anything I soldiered through. If it had been a little more concise, the show may have made more of an impression but as it was all based on that familiar bump and grind of Lynch soundtracks. The starter was a ringer for “Pink Room” and the lord knows there’s nowt intrinsically wrong with that. This operatic blues with a burlesque tick works pretty well. The location was perfect and so was the sound for the most part.
She plays out her part very well and of course, this lady would be a far more sound role model for youngsters that that caterwauling Florence bisom. Being that she sounds like a bunch of owls that are not what they seem. The music undulates like it should but the songs just don’t really rise to the atmosphere.  I was surprised that the show wasn’t totally sold out but really couldn’t hack the guy who opened with his laptop making soundscape type approximations. According to Mr D’uff, the encore was the crowning glory but I’d already left for the train. Thinking this was really more Wild palms that Twin Peaks but maybe her LA configuration is the cause of that.
Mr Lynch considers Ms Bell a songbird and at this point I’ll give him the benefit of the doubt. I’d like to hear more substance shine through the inherent style though.
Here’s a clip, see for yourself... 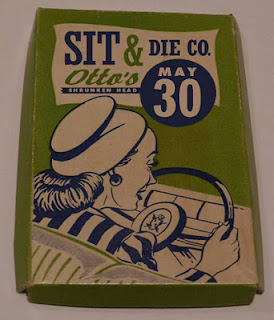 Ready for the road this summer?  Susquehanna Industrial Tool & Die Co. is the accessory you need to start the season right!