Can’t remember exactly but it’s usually about now that we get inundated by people looking for yon contest that hijacked our namesake. Maybe they’ve finally been shaken off? And while hat would be a turn up for the books, one had better not start counting that fowl just yet. Desperation makes folk do peculiar things at the best of times and having anything to do with such a beastie scores high on the desparometer in my book. Not to be confused with the despairometer you understand.


Went to the post office last week and eagle-eyed counter guy guessed that I was posting an “album”. The package was a dead giveaway and he immediately thought I was an ebayer. Of course, I put him straight but just lately I’ve thought about dipping my toe in those poisoned waters again. The consideration is to raise funds and get the chuff out of Dodge, away from the fading pulsebeat of wage slavery. I’ll be 55 soon and a lot of people haven’t been adding 10 to that too much lately, in the case of Nick Curran – WAY short of that. Actually, I got a message from a friend in PA earlier that's helping a friend sell a 45 collection but I think he wants it all to go at one time. If you'd like me to forward the list then leave your e-mail. Chances are though that you might be out to unload too?

So yes. Perhaps, maybe it’s time to consider taking a flyer? What’s the worst that could happen? I’m still sort of counting on those Mayans but a Rezilloshow in Edinburgh wouldn’t be too bad a location for an exit, right? To counter that, there are people and things worth sticking around for but there has to be more to this existence than having to tolerate situations and individuals that don’t fall into that category. There are people and things worth putting up with the bullshit - and a ton more livin’ to do should the absolute need arise. I’ve really had it up to yonder though – gestures at lamp post outside the window so woe betide those that are just posturing, serving up the jargon and hitching their sad wagons to the outright enemy.

There are two categories as I see it – problem and solution – it’s time to kick ‘em out!
Posted by Lindsay Hutton at 12:11 PM No comments: 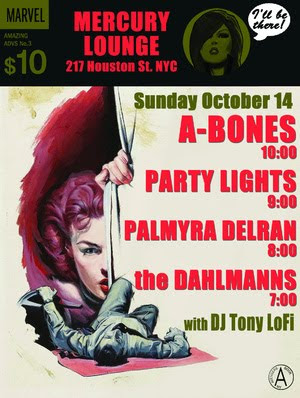 The Dahlmanns are heading USA-ward and can be seen at the following pitstops.

More details at the Pop Detective and individual venue websites. I can’t make it so please cut along and support this fine Moss ensemble as they shake it up on each and every night. Mercury Lounge show is with The A-Bones and Palmyra Delran! All others are with The Deadbeat Poets and The Jellybricks.