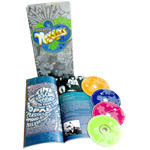 Since I'm still somewhat disabled as far as typing goes, here's only a (very) brief update on what's doin' the RPM's on HQ's hi-fi. First 'n foremost it's the various Stooges re-issues; the 2LP editions of both Elektra LPs not only offer some splendid extras, but easily blow any previous issue I own outta the water fidelity wise. Mentioned the accompanying 45s earlier on, but please be also on the look out for Sundazed's re-ish of the Search & Destroy/Penetration 7". It's such a blast the finally be able to spin S&D on this format. Was there ever a better intro? Rhino's Children Of Nuggets box-set also holds a lot of amazing material. And surprisingly plenty I'd never heard before. Long time NBT readers might find a lot of the inclusions rather obvious, but like the original Nuggets sets, this one can't be beat for shear start-to-finish playing pleasure. Sure, there's stuff I'd put on there if I was in charge (the Gun Club, Screamin' Blue messiahs, Scientists, New Christs etc. come to mind). But then again, with 5 hours of good, good music to enjoy; who's complainin'? Current day nuggets are supplied by the Reigning Sound. Hot on the heels of the fab-o Home For Orphans disc, comes the equally fine (but totally different) Live At Maxwell's on Spoonful. Liner notes by Miriam Linna should be all the recommendation you need...
Posted by Jeroen Vedder at 10:01 PM 2 comments:
I was gonna head into Edinburgh tonight but a bursting napper suggests perhaps not. I'm pondering taking some of the fantoosh new medication that's supposed to quieten said nip but I found that it made me woozy last time out. It's one thing being spaced out at work but fuck that for a game of soldiers in my own time.
So we'll see, maybe easy and quiet will work just as well. Brother Joss dropped some dvd comp action on me the other day so perhaps I'll just have a swatch at that instead?...
Also managed to get my hands on the "not for export" MX-80 "We're An American Band". Their discriminating noise might just kill or cure me and either would be fine at this juncture. Time to blog off...
Posted by Lindsay Hutton at 5:53 PM No comments:
Newer Posts Older Posts Home
Subscribe to: Posts (Atom)