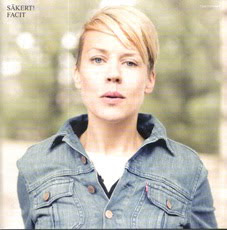 Fending off recent press tosh regarding the fact that she is quitting music, Annika Norlin returns with her Säkert! crew to prove otherwise. Conclusively.

“Facit” is the second album by Säkert!, her Swedish language combo. Those of you who pay attention will already be on tenterhooks. It’s worth noting at this point, that versions of these songs in English will be coming down the pike in the not too distant future. You can be sure that the subtitles will be every bit as potent as these originals.

I’ve written about how you need to listen to Annika a lot over the life of this portal and make no apologies for that. In any lingo, her attention to detail and ability to turn me into an awe-struck fan is unsurpassed. If I ever feel like knocking this malarkey on the head, I listen to Annika and that reboots my faith in the thing called popular music.

“Fredrik” kicks the proceedings off, reminding me of an early Wannadies song that I must have seen that band play when I caught them first in Berlin at the 1990 BID. “Rotary” also employs this wonderful spirit. “Honung” (“Honey”) has a similar tempo to the Robyn cover that Ms Norlin did with Anna Järvinen on Swedish Television some time ago. It breaks in a choral wave against a chiming guitar that will undoubtedly pack quite a kick when they get it out on the road. “Isarna” (“Ice”) is a lyric trade off between Annika and Lovisa that’s anything but frosty with a beautiful, almost African guitar flourish below the main thrust. Adding to the majesty as it races toward the finish line. 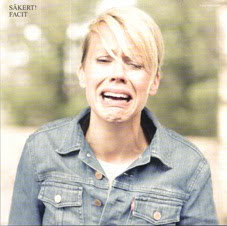 “Fär Jag”(“May I”) is a quiet, symphonic song that uses her voice to maximum effect while the slow burn of the band bathes the track in a shimmer. “Riot” ultimately transplants a Black Angel Death Song screech into a brooding anthem that will undoubtedly become a staple. Imagine Nico with a warm mulled wine kind of accent. It never quite spills over but the tension is palpable. The recorded equivalent of the last few frames of the final episode of The Sopranos, I felt pretty wiped out after my first encounter with this one.

No sign of “Fallar Isär”. The vinyl version of the album will include an additional song, “Ner i gruvan” ("Down In The Mine" – According to Google translation!).

This band just swings from pillar to post. The way the guitar occupies each song is an utter joy and the percussion too. Nothing overstated, nada overdone. "Facit" is something that you can only chalk up to chemistry.

Burning many degrees hotter than The Arcade Fire for me, Henrik Oja has produced the perfect blend of folk and pop and makes sure the band lives up to their moniker. Nothing is more sure than this deserves to blaze a trail right across the planet. I’ve never been more certain of anything. Of course, If that doesn’t happen then I’ll hold each and every one of you accountable.

Out September 15th on Razzia Records. Pre-order it here.

Thanks Martina!
Posted by Lindsay Hutton at 5:34 PM No comments:

Beyond Punk, curated by Gaye Advert.

(Thanks to Tom for the link)
Posted by Lindsay Hutton at 5:38 AM No comments:
Newer Posts Older Posts Home
Subscribe to: Posts (Atom)