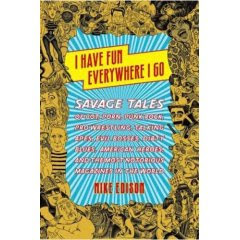 Couple or three weeks or so ago I was listening to NoFoSo and heard a track by Mike Edison and the Rocket Train Delta Science Arkestra. “Pornography, Part 1” isn’t the kind of thing you’d hear within a conventional radio format. If Terry Wogan gave it a spin on Radio 2, I’d consider that there might be hope for humankind but that’s unlikely.

Anyway, that sparked a chain reaction that has resulted in a hook up with the book of the album the cut came from. “I Have Fun Everywhere I Go” (Faber and Faber) is the memoir of that documents Mr Edison's adventures in smut, wrestling, rock’n’roll and just about everything inbetween.


To call it inspirational would be to damn it with faint praise 'cause I haven’t been this glued to a tome in recent living memory.

If you take Hunter S., Meltzer and Tosches and froth ‘em up in a blender (or Turmix ha ha) then you’re beginning to get a beat on the tempo of this prose. As the printed word as entertainment goes, this is the shizz. Good old, ragging on everything, writing the way it’s seemingly never done anymore. There are a ton of great lines in here. Old school NBT-readers will find much solace in these pages. It’s forged of the stuff that brought us all together in the first place. Jeez, there's even a section where the man ends up as a prize in an A-Bones dance-off!

The companion “album” with “songs” culled from the material in the book is neck deep in the filth and the fury of the printed page. The oratory is propelled by a soundtrack of equal squalor conjured up by Edison, Jon Spencer, Mike Chandler, Mykol Fornasero and Joey Valentine. It’s not for the faint of heart but it’ll put a big, fucking grin on your kisser. Check it out for yourself here, nothing I could write about it could come close to the experience. It’s not work friendly, nor is it likely to endear you to anyone of a nervous disposition. What further fucking reco do you require?

I’m not finished it yet but with the pound/euro currency agin the dollar situation, you should treat yourself. Quit bellyachin’ that they never make them like this or that anymore because they do. It’s true, such kicks are rarer than hen’s teeth so when a supply presents itself then it’s wise to stock up.

US Amazon
Posted by Lindsay Hutton at 9:23 PM No comments:
Today has been something of a bust. It started out productive enough when I dragged myself outside to do a bit of garden choring. It was pretty grey-looking, overcast. Like it was gonna thunder. Buoyed by this, I figured I’d maybe head into Edinburgh and catch the “Berlin” film. Not having made it to the real thing in June. But since then I haven’t been able to move my carcass outside at all. And now the weather is great and it’s pretty dumbass not to take advantage of that but you should just colour me stupid now.

Tried to put stuff on ebay too and it won’t let me because of some fuck up with a “zip code”. Of course we don’t have those and it was never a problem in the past. So hopefully they’ll sort it out because I want to get on with this life laundry idea. Time to lose a few kilos in the stuff department.

As exercises in procrastination go, I think that I’ve surpassed myself today. Soon it’ll be time to go back to the coal face and that’ll piss the hell out of me even further. The weekend started off so full of promise and yesterday’s schlep around Glasgow with Anette and Margaretta will be another fleeting memory punctuating this perfunctory existence. So back to "I Have Fun Everywhere I Go", damn it’s good!
Posted by Lindsay Hutton at 7:08 PM No comments:
Newer Posts Older Posts Home
Subscribe to: Posts (Atom)