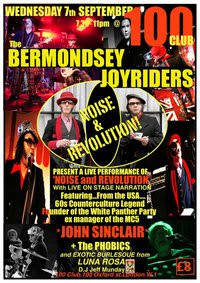 September is upon us and apart from it being the month of my birth we've got 3 hot gigs to celebrate it with you all. My official Birthday is on the 6th but you can choose any or all of these fine nights out to raise a toast to my arrival on this sceptic Isle, no need to buy me an expensive gift, your mere presence will suffice!
Wednesday 7th September at The legendary 100 Club, Oxford Street, with The Bermondsey Joyriders + John Sinclair (60’s counter culture revolutionary/ex MC5 Manager) and guest DJ Jeff Mundy. + Exotic Burlesque from Luna Rosa too all for £8 in advance or £10 on the door or contact us for £5 tickets (be quick) 7:30 til 11:00pm not to be missed!!! https://www.facebook.com/event.php?eid=233535206678475

Saturday 10th September at the New Cross Inn, 323 New Cross Road SE14 6AS with The Television Personalities and The Electric Cocks 8pm Start, tickets/details from http://www.newcrossinn.com/event.php?id=240

Friday 23rd September at The Grosvenor, Sidney Road, Stockwell SW9 0TP; with Wonk Unit, The Bucha Effect, and The Electric Cocks and this one is FREE! https://www.facebook.com/event.php?eid=250633868294226

If you need any more Info just send me a message and I will be delighted to help.

Posted by Lindsay Hutton at 7:10 PM No comments: 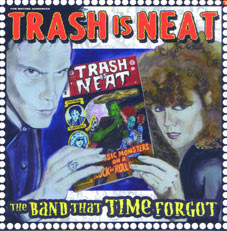 So here’s something you won’t want to miss. A super-limited (250 - numbered) slab of scarce live Cramps material that is only up for grabs to members of the Staysick board. It’s like one of those things they advertise on TV as not being available in stores or from anywhere else. So if you want one then you have to line up over there (link down the page a bit).

As if documentary evidence was required, this act provided one of the most comprehensive rock’n’roll visions of any popular music group ever. The fact that they never reached megastardom is moot. They didn’t care. The tail’s raison d'être was never to wag the dog – merely to see justice done. And ultimately to make this world a better place.

So anyway, the folks behind this are continuing what the LOTC wrought back some 25+ years ago. This is their biggest project to date and quite likely their last because the penny has dropped as to just how much effort goes into putting something like this, or the video comp, or – in the olden days – a fanzine and whatever - together. This is for the fans and not to be hawked on any auction sites or any such shennanigans.

What’s on it? Enquire at the desk but don’t be wasting Mondosean’s time or I’ll set Professor Von Bainée about ya.
Posted by Lindsay Hutton at 6:42 PM No comments: 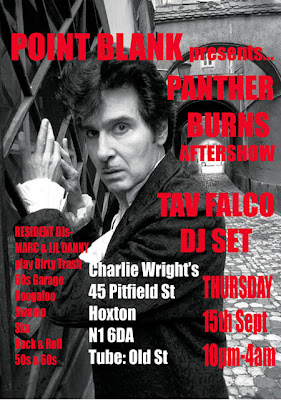