A previous engagement meant that I was unable to partake of Panther Burns action. Saturday saw me head South Coastward to the climes of Brighton. A first for me and I’m wondering now why it took me so long. Echoes of Norway I guess.

A flight at just after 6am meant that I was cast in among the package holiday brigade at Edinburgh airport. Not ideal at that time in the morning but sometimes there are things that have to be endured for the greater good. The actual journey was a relative dawdle and I arrived at Brighton Station a little after 9am in the pissing rain.

The event? The Bambi Molesters were making a welcome pitstop to play the half century birthday bash of Los Fantastico’s Django Deadman at the legendary establishment that is The Prince Albert.

Brother Clive was unceremoniously disturbed after some frenzied liquor action the night before and took me to his very well located and ubercool pad for some coffee and do dump my bags. The crew that met up for breakfast held it together very impressively after details of the antics of a few hours before came to light and I can’t recall the name of the joint but the sausage sandwich and espresso went down pretty darn well.

From there, it was time for some shopping and pub crawling with my Croatian compadres in a part of town that was like an expanded Haight Ashbury. Dozens of cool clothing, record, book and comic stores completely different to any other town centre I’ve been near in recent living memory, a really nice, boho vibe with plenty of groovy shop fronts. A couple had robbed the Ren and Stimpy font for their signage, can’t go far wrong with that. Our first aperitif of the day was taken in the William the Fourth hostelry where base camp was set up for a wee while.

A most agreeable afternoon was spent wandering around and it’s certainly a place I’d like to spend a bit more time exploring. It was grand to be able to visit the Punker Bunker and to see Buz again. T’was getting close to sound check time and those Bambi’s needed to get back to the hotel in order to prepare. I think that The Sussex was the name of the pub we were in just prior to that.

The Prince Albert is a great, great place. The band room itself is one of those places that is just steeped in history. Great stage facilities, excellent sound and to have such a place on your doorstep must be fantastic, though perhaps not for your liver.

Opening the proceedings was Sin City, I missed a couple of songs because of the need to eat something but this local duo served up some Americana standards as the place began to fill up. Los Fantasticos were next and started with a version of “Lady Grinning Soul” that is to appear on a surf tribute to Bowie. The appearance of brass to punctuate their sound also allows them to veer clear of your average instro band. 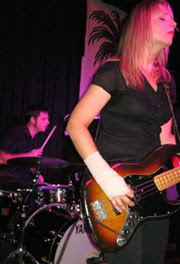 In recent years, the “instrumental music” canon has been pretty much redefined by The Bambi Molesters. They operate to an almost orchestral degree, so imagine the surprise when the penny drops that there’s a combo not unlike them operating outta Brighton.

Los Fantasticos were an unknown quantity to me this time last year. Indeed it was only when I travelled south to see the former that their existence was made known to me. Indeed Django had organised gear for The Bambi’s London debut at The Luminaire last November. Long story short, he told me that The B’s would play his birthday party next September and lo and behold – it came to pass!

This, the band’s second appearance on this sceptic isle was as the blueprint four piece. Not augmented by horns or keyboards – just the raw materials that make them a pulsating joy. They have an album called “Intensity!” and that is what they brought big style. The sound in the place was crisp and magical with an interplay of instro-dental (that’s a form of cinematic sounds with teeth) virtuosity and even some beach standards replete with vocals such as “California Sun”. 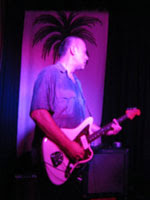 This is one of the very best beat combos on earth – Hrvoje keeps the whole thing on a primal roll with Lada. This is the foundation that provides the 360 degree squall that Dinko and Dalibor weave around it. Like strychnine-flavoured candy floss (hey we were at the seaside after all). You can keep all that brooding quiet loud indie guff because this is one behemoth that just keeps on evolving. The new concert film that’s coming out in November (or maybe sooner) will validate any claims made here and then some. Any film festival out their worth their salt should be begging that the band and film come as a package to make their event truly count.

A truly great night in a wonderful venue. By all accounts they gave the garage rockers a right royal dose of salts at the Blast Off Festival in Nottingham. I wish I could have joined them but sadly I was booked on a plane back to someplace called reality. Hungry for the next encounter, anyway – anyhow – anywhere.

Had a wander on Sunday prior to leaving that took in the horrors of the remaining pier in all it's tourist-fleecing glory and the seafront. The skeletal remains of the torched boardwalk has way more charisma. I was wondering if they can't project some kind of holographic illusion on to it from the shore. Without the aid of stimulants I may add.