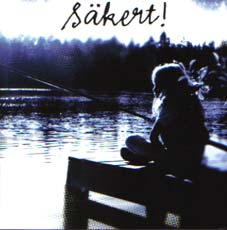 As you’ll no doubt be aware, the anticipation of Annika Norlin’s Säkert! Swedish language project has been high since my swededealer told me about it. At this point, I should state that it’s almost nothing like Hello Saferide, other than the fact it’s chocka with sparkling pop thrills. Like the Pitchfork review of the Vapnet album (who are in Glasgow this coming Wednesday remember?!) it doesn’t matter a jot that you don’t speaka da lingo. Imagine if Petula Clark made an album with Pulp? There’s a decidely quality Eurovision pulse beating though all 11 magnificent tracks. It has hints of Carole King and Jackie DeShannon but most importantly it reinforces this woman's unique ability to nail a song. You can listen to the single over at myspace.
I wonder if it would be possible to record the English translation to these songs? In order for them to be heard by as many people as is possible although I doubt if it'd be half as poetic as it does in the native Svensk. The album runs the gamut from shimmering sombre folk to bouncing Nuevo motown and never misses a beat. There's even some whistling. “Det Här Är Vad De Säger” (“This Is What They Are Saying”) is almost choral or churchlike. That ticker of yours just might though. Säkert! means “sure” or “certain” and this is sure/certain to hit whatever spot that requires tweaking. “Allt Som Är Ditt” (“Everything That’s Yours”) is like Eno period Roxy Music channelling “Common People” and strangely the closest parallel in terms of a recent UK release would be the Jarvis Cocker record. However this is way more consistent. I’ve no idea what the individual groups that these musicians have been drawn from sound like but the investigation is about to begin. There are a couple of great duets (one with Martin from Vapnet) on here that have a particular Eurovibe. If the UK is set to have the Mozzer represent us then Sweden should secure the services of Ms Norlin. She’ll wipe the bloody floor with him. Visit the Razzia website to be directed as to where you can get your paws on a copy. (Thanks to Mr Ulf for the translations)
Posted by Lindsay Hutton at 9:14 PM 1 comment:
Newer Posts Older Posts Home
Subscribe to: Posts (Atom)