The Left snarled outta Hagerstown, Md during the eighties with a sound that was like Radio Birdman having a square-go with The Angry Samoans. They wrote songs with titles like "Fuck It" and "The Viet Cong Live Next Door". "Redneck 7-11" begins with a Skynyrd refrain and goes on to describe this "stupid fucking asshole heaven". So I guess that you never heard their wares on the radio? Bona Fide have collected their entire works (20 songs) and seared these into one of these shiny round disc things. They've done a good job of the mastering too. They sounded like they meant it then and the bile stands. "Jesus Loves The Left" according to the title. What's not to but don't be expecting no picnic. "CD release and listening party for our new Jesus Loves the Left CD on Sunday August 27 @ Lulu's Off Broadway, Baltimore MD. Meet and hang with Bona Fide and the Left at one of coolest spots in Baltimore. Hear the new CD as well as swell George Brigman tunes and lots of surprises. Plenty of CDs and our new "Real Rock, Real Loud!" Tshirts. Drink specials and freebies too! A fun gathering that is not to be missed! So Come on Down."
Posted by Lindsay Hutton at 6:52 PM No comments: 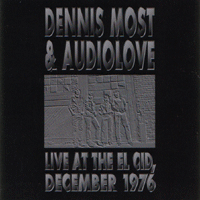 I’d never heard Dennis Most until a small packet arrived behind the door here recently. Turns out he’s a veteran of the rock’n’roll wars and even had a band called Punk in 1972. So he’s old enough to know better but is still cranking it out. If I’d heard the band back in the mists of 1976 then I would have been an avid supporter. The Dictators/BOC/Dead Boys axis would have snared me for sure and the Captain Trip release which captures Dennis Most and Audiolove at the El Cid at Ludlow, Mass. But as much of a time capsule as that piece is, the real gold is in the most recent recordings with The Instigators which will presumably made available in due course. This literally flies outta the traps and is at once fresh whilst harbouring all the fine old school rawk elements that separate the wheat from the chaff. What’s the point in covering The Stooges “Down On The Street” you might ask? Well if you strap on an AC/DC undercarriage it sounds like a whole new model. Titled “I’m Not Dead Yet”, I hope that someone will put this out on vinyl because that’s where this big fat sound belongs. Along with this, I received an Atomic Buddha disc and there are some good songs on there but the lo-fi ness, particularly after the assault of the Instigators, tends to sound a little blunt by comparison. I think that Keith Grave is the bass player in both groups. So yeah, plenty of air guitar practice to be had in the company of these babies. You may even develop blisters.
Posted by Lindsay Hutton at 6:20 PM 1 comment:

So yeah, somewhat rested from the closing bout of this year's Edinburgh Film Festival... I can get to rustling up a few words here. Air Guitar Nation (not to be confused with West coast of Scotland's Ayr Guitar Nation) is a great little documentary that works in spite of the obvious daftness of the subject. We've all done it. We've all caught that mighty riff and made that Townsend windmill at some point. You haven't? Your arse. So anyways, The USA decides to get in on the Annual Finnish World Air Guitar Championships and this charts that journey. Admittedly there are dubious sequences throughout the film which makes it look like a spoof. This Björn Türöque character seems like a "plant" but all turns out well in the end and like it's said. Finland rocks. And so does this film. By the end you'll be grinning like a loon and up for having a go at it yourself. One wee gripe is that they spell Roy Trakin's name wrong twice in the credits but hey, it was a surprise to see him up there. AGN is actually headed for Oulo in September where airaoke may well eat itself but it'll have a whole lot of fun in the process. Would have liked to have stuck around for the Q&A and maybe even the Mercat event but I had to make a quick exit and get to the Cameo for loudQUIETloud: a film about The Pixies. I was never a fan but they had their moments and it seems like Charles Thompson is something of a character. This documentary about their reunion doesn't offer much in terms of a reason why they became so huge but it holds together pretty well, even for a non-believer. Somebody should be writing a treatment for a Deal sisters reality show though. It could well be a new Osbournes. They are something else. Nothing much happens in between playing to packed houses, the old tensions are apparent and that's what probably feeds the urgency of their trademark sound as described by the title. It's probably better that they don't make another Pixies record but who knows. lQl offers up some some great live footage and while it maybe won't convert you, it's a reasonable way to spend a litle under 90 minutes.
Posted by Lindsay Hutton at 10:41 AM No comments:
So let's see, this thing looks like it's working again. It wasn't before I went to catch Air Guitar Nation and loudQUIETloud: a film about the Pixies. More about these tomorrow, I just had the train ride from hell back from Edinburgh. Packed with pissed-up Snow Patrol fans and sundry other divots. Not pretty or clever. And people ask me why I don't like to go out, if you'd have been there then you would have seen a cast iron, maybe even titanium example. Wonder if the poor guy who had to go all the way to Stirling among this rabble and then change for Perth made it? First Scotrail really need to get their act together, the thought is making my neck pop. Time to calm down with some Bilko.
Posted by Lindsay Hutton at 12:56 AM 1 comment:
Newer Posts Older Posts Home
Subscribe to: Posts (Atom)