Recollections from a Thursday Night Punk Mass - Parts One and Two

I decided to tackle this in two parts. I’ll address the occasion first and then deal with the aspect that reflects a particular personal prejudice. The latter borne out of a dread that came over me when I first read what format the evening of July 9th would take. Often I find that if I worry about something long and hard enough, it doesn’t come to pass but this time my hunch was entirely wrong.  My emotional investment was off the scale and the reason for this happening – or Punk Mass – as it was billed - took place to mark the significance of an entity that is known to the world as Suicide.
Part One 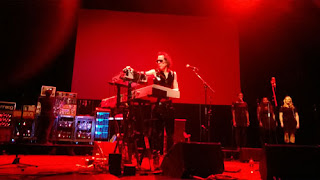 As you’re undoubtedly aware but in case you came in late, the first Suicide record was the sonic equivalent of “Eraserhead”. Nobody who ever encountered it to this day has gone unaffected. Particularly back before their influence became the DNA of EDM and several other genres. They have since infiltrated the mainstream to a degree that might have seemed ludicrous when Clash and Costello audiences were throwing everything that wasn’t nailed down at them. 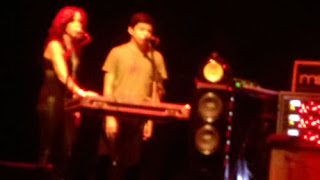 I just watched a YouTube clip where Marty talks about them being “interpreters”. The fact that the debut came out here via Bronze made it possible that they were able to come here and terrorise Europe earlier than they might have done otherwise. Once seen or heard, Suicide was never forgotten. No matter what camp you were in. 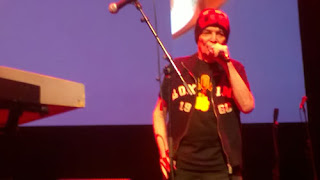 London was a nightmare last Thursday but at least the weather was nice. Gridlock brought upon by the tube strike meant that the only way to get anywhere was on the hoof. Prior to wandering off to the Barbican, I was reacquainted with my old mucker Derek Harris who runs Lewis Leathers. WE calculated that we hadn’t seen one another for 30 years but just picked up where we left off and agreed to continue the reunion at the show.
I made it to the venue in plenty of time. It’s a sprawling place but relatively easy to navigate and I had a great seat. Second row, front centre (C33). 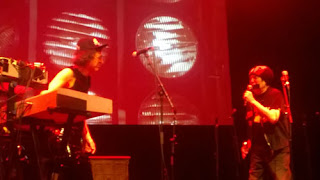 Suicide – A Punk Mass was performed in two parts. An ensemble that calls itself The Feral Choir kicked off both. I think I’ll leave it at that. This ensemble included the Japanese combo Bo Ningen. One of them looked like Joey Ramone if he’d raided Ian Astbury’s wardrobe. As a form of expression, I guess it has its place but not anywhere in my proximity.
Then Henry Rollins bounds on and provides an introduction from his perspective. I’m not a fan of much of his music but let’s not forget that he sings on the version of “Ghost Rider” that made the soundtrack of “The Crow”. I believe he is sincere and that his enthusiasm is infectious. 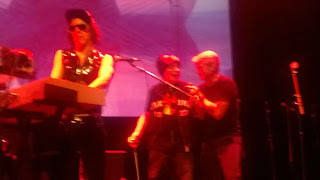