A message from Wreckless Eric and Amy Rigby!

"URGENT - we need gigs in England on the weekend of December 20th and 21st. Would anyone lke to throw a house concert??!?

If you do then contact them via here.
Posted by Lindsay Hutton at 5:50 PM No comments:
Just pondering the past week. Having blown out the consideration of going to the movies, there's some time to lollygad. Of course there's a ton of stuff I should attend to but the King of Procrastination needs some time to do what he does best. Since this time last week I saw the Wooden Shjips make their debut mooring in the port of Glesgae and attended two shows by the inimitable Wreckless Wrigby. It was an utter gas and a privilege to have them around.

This week will be a little quieter but another diamond geezer is set for these parts. Jon Graboff will be here in his role of Cardinal this Friday at The Picturehouse in Edinburgh. Weekend after that is The Boonaraaas in "the London" and then the one after that, Springfield-er Joe Terry will be in Glasgow. That takes me into bloody December!

When everything seems like they're gonna come crashing in, "it's the little things" that matter.

I'm thinking that this schedule isn't too shabby for somebody who is way old enough to know better. Let's hear it for the power of positive thinking.
Posted by Lindsay Hutton at 11:45 AM No comments: 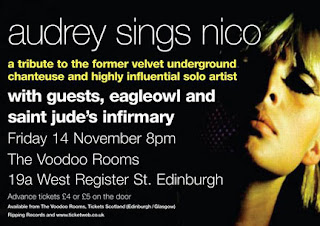 Audrey sings Nico, this coming Friday in Edinburgh...
Posted by Lindsay Hutton at 11:43 AM 1 comment:
Still pondering the Icelandic double bill this afternoon. I need to make up my mind soon, not something that I'm terribly proficient at right now.

Meanwhile, swing by rezillos.com for word on the new (download only) single and shows in December. These include a return yo the Kinema in Dunfermline.
Posted by Lindsay Hutton at 9:35 AM No comments:
Newer Posts Older Posts Home
Subscribe to: Posts (Atom)