The Solbakken Fuzzfestival is a bi-yearly event that takes place out on the South East coast of Norway. Set in an enclave of Arendal called Moltemyr, it’s a garden party set in a very well-appointed garden between two houses. An invite to this was an offer that I was not about to refuse and getting to that part of the world isn’t exactly a cakewalk but like the song conveys, have love, will travel.

It took a smidge over 12 hours door to door. Exactly a week ago from right about now I took a bus ride through picture postcard beautiful vistas that look like a cross between 'wir ain' highlands and the Pacific Northwest. The shimmer of the sun on the lakes as it went down just added to the twilight zone-ness. All you really need to know is that it is spectacular.

Having dropped by Risør a couple of years ago, Arendal further reminded me of the similarity between that region and the East Neuk of Fife. They don’t have a chip shop like they do in Anstruther but maybe I could go out there and open one?

Within a half hour of being there I was out on the town with Fuzzmistress Hilde. After some Indian food we hit up the hostelry she works in called Barrique. A very nice old wood varnished bar with at least one member of staff that will point blank refuse to serve you a mojito. I never take for granted the opportunity to take such jaunts and this was the only evening it would be possible to make that particular scene. And for Hilde to take time out of her busy schedule like this was above and beyond because she is the epicentre.

As straight talking a wee bisom that ever walked, this one can get stuff done. All the others that are involved with this are equally driven, It’s an abject case for labours of love always trouncing something that is entered for gain. Their gain was to see everyone have a great time as a result of their selfless planning. Getting a wee preview of the site the day before was a trip and just hanging out sampling Magne’s epic brews and the Solbakken hospitality really hit the spot.

The freak weather has been causing ructions out there too and there’s a BBQ ban in Norway right now. That wasn’t to deter them though and a number of broilers were installed to take up the slack. These folks had thought of everything and maybe even a little more.

Saturday rolled around quick and it was time for the garden party. As the revellers arrived it was clear that a great community not just from the immediate locale had grown around the event. With a family element that never reduced it to the level of the fete. I met and talked to a ton of people that I wish I could remember their names. It's an age thing that's getting worse by the day.

It all kicked off with a kind of folky review by Revesound. I’d just watched A Mighty Wind a few days beforehand and the similarity wasn’t lost on me. It became apparent even then that the space had become a natural amphitheatre and in the main, the sound was excellent for an outdoor concert experience. At some points during the evening, a mighty wind would indeed attempt to blow the cover off the stage on several occasions. It was expertly tethered though. 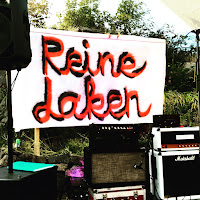 A period of broiling and hanging out followed that before the remainder of the music was rolled out. Snok set a pretty high bar for a bunch of actual real life teenagers. Led by Hilde’s son Lars they managed to conjure up shades of Sabbath in 1971 when even their parents weren’t around. Decidedly not-lumpy doom rock, they just made their first recordings that I’m very much looking forward to hearing. Their set was all the more amazing because they had to get a substitute drummer that knew the ropes at stupidly short notice. That guy did good.

As I mentioned in Vulcher zine lately, little in my existence gives me greater pleasure than watching and being around Reine Laken. This time out they’d enlisted a new member and it was Camilla’s public debut. It went great and by the time they got to their version of Bikini Kill’s "Rebel Girl", the gathering went under the thunder. "Blitzkrieg Bop" into "Dancing With Joey Ramone" was a very nice touch. All the anxiety that goes into these performances is very much appreciated by their fans. I was thinking about how all the Madrid folks would have loved this.

Wirkola Hellraisers are a solid combo that underlines the hard rock seam that ran through the day’s line up. I'm really digging the fact that Nazareth were (are?) so big out there and the ‘raisers deliver a tasty “Kentucky Fried Blues”. I think that Dan McCafferty would approve. At the other end of the spectrum, their take on the Sweet ignites around a three guitar attack, one of whom is Erland Ottem who was in Clawfinger. Their "Ballad of The Lower East Side" wasn’t slouching none either.

DeMidlertidige (sp?) played at the grungier end of the spectrum and during their set I was blethering. Someone told me that they were playing an Alice In Chains song at one point and I have to say that they rendered it listenable. Something I can’t say has ever happened with that actual band. This Stina girl can sing. I even heard a little Nico in there and of course Grace Slick on a faithful run through "White Rabbit".

Rangers raised the stakes for Dunfermline’s finest by including "Close Enough for Rock’n’Roll" and they also fired out trusty takes on "Cold Gin", "Godzilla" and "The American Ruse" during their set indicating a certain level of taste for those of us that recognise the fine line that runs through the vein of heavier music.


The band's were all done and dusted by curfew time but the party went on a good deal longer. heading back there in the daytime, the festival elves had been out and cleaned up. It was all looking as though almost nothing had happened. Service above and beyond self all the way.

Anyhoo... Solbakken FuzzFestival is something the world could do with a little more of right about now. The best small but perfectly formed festival action I’ve had since the legendary House of Rock that went down in Moss in that fateful June of 2011. People talk about game changers but that was a life changer.

My sincere thanks to all those folks that made this happen and for them having me there. There might not have been any morild this time but there was some magic here and there so that’ll suffice for now but I’ll need another RL fix before too long so I hope they have something in the works.

The adventure came to a close with a few hours in Moss Rock City and pretty much before I knew it, I was back on the bus heading for where it seemed like I had just started out. To add to that injury, I tried to use some currency at the duty free shop that had expired. I’m not sure why the Scandinavians change their notes so often but it’s a pain in the arse. Just as well that everything I had left wasn’t hooky and the liquorice score could be made.
Posted by Lindsay Hutton at 7:14 PM 2 comments:
Newer Posts Older Posts Home
Subscribe to: Posts (Atom)