Not sure where my storyline or plot arc is headed. The writers are coming up with some twisty, turny stuff. Last week at this time, I was sitting in the CAU having been dispatched there by ambulance as a precaution to my described symptoms. This wasn't a Google self diagosis I hasten to add. The first night off visiting for a long time and I end up almost in hospital myself. I left "against advice" and returned the next day for the treadmill test.

All pretty far fetched but life has been like that lately. That pish about what doesn't kill you makes you stronger for inst. I don't feel like donning a super hero cozzie any time soon and exactly what the season finale entails is anyone's guess but it's coming.

As I trochled back to the car after The Ladykillers on Sunday night I was fumbling with my phone while a fox - the four-legged variety sadly - just stood and looked at me. As if to say, "what's that one's story?". If I looked like how I felt then it was quite within it's furry rghts. It glowered at me as I backed out of the parking space mere yeards away. Not spooked in the slightest. Perhaps it thought I had a buckshee slice of Hippodrome Centenary cake to bestow? I didn't by the way.

Reality is way stranger than fiction. Bordering on farce. Which of course rhymes with...
Posted by Lindsay Hutton at 7:10 PM No comments: 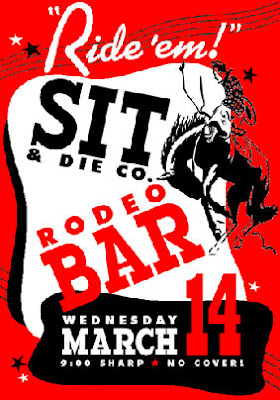 Saddle up with Susquehanna Industrial Tool & Die Co. this week for another visit to the rootin'est, tootin'est joint in town, the ol' Rodeo Bar! Okay, pardner?

*SATURDAY, MARCH 31st / THE COLONEL'S CAVALCADE OF STARS /It's a hillbilly hoedown at the North Penn Gun Club in Quakertown, PA!