Why do I get suckered into these things? Why do I end up in some godforsaken place listening to music I don't like every other year or so?
The set-up is like this: first, I forgot how bad it was last time. Second, "hey, free tickets. And you know, I really should keep up with what's happenin' more often and the line-up ain't too bad...".
But only a few minutes after arrivin' it's obvious once again: drinkin' beer in a field of mud just ain't my thing. Especially not with three stages close enough together so there's no way one can listen to just one band.
We're talkin' a local festival here with no signs of crusty and/or metal acts, nope just you're average well-meaning, late 20s/early 30s crowd, slightly arty, you know the type, nothing wrong with that. So what made grandad grumpy once again?
Well, for starters, If you didn't want to stand in line for an hour or longer, the only food option was fries 'n burgers of the worst pre-processed kind. Then, of course, there was the pretentious prog-rock, sorry, "indie" band from Belgium.
But what really did it for me was walkin' into this tent where two guys had set up their laptops on stage and switched on some generic beat, which is bad enough in itself, but when a girl jumps on stage yelling something along the line of "Hi there party people! Do you wanna dance?" I'm off... Fuck that shit! I ain't no party people! And I certainly don't wanna be addressed that way. Plus, any audience that willingly pays money to see some dork switch on his computer and does little else than stand around and look funny for over an hour, is beyond salvation. Did I mention the marketstalls with their overpriced artcraft and massage offers?
Heck, I think I need to lie down for a while before this vision of "Woodstock+Camdenmarket=the future" takes hold of my brain. Please say it ain't so...
Posted by Jeroen Vedder at 10:25 PM 5 comments:

Chances are that you may have heard of the Swedish combo Problem but you may not have actually heard them. If you have then you’ll be in awe of their fried pop thrills but if you haven’t had that pleasure then check out Central Stimulering = Problem. A 2cd 40 song retrospective of this fine Malmö ensemble on the National imprint. You can get it from Bengans or Cd On (see sidebar). And later this month, the band will be appearing at KB with the mighty Nomads (Saturday, September 16th). Having had the honour of catching them (both) in full flight at Gearfest, this return match is not to be missed. Problem were a huge influence on our friends from Solna and this collection goes some way to showing just why. Their organ-driven, sometimes 60’s kissed psych-pop sounds as fresh today as it did all those moons ago. If anything, it’s stood the test of time far better than most of that 70’s punk racket. I’ve no idea why Sweden isn’t globally fetéd in the way that the UK is for music. There are more great bands per cubic centimetre than there ever has been here but anyways, there go those scrambled eggs again. The Rubinoos-like “Ja Vill Inte Ha” is a tune of NRBQ’s “I Want You Bad” proportions. Miss any chance to gorge yourself on these guys ouvré at your peril.

Well, this new Legend Killers cd (on What Wave? Hello Dave and Rena!) looks unassuming but don’t be mistaking that for any shortcomings in the sonic department because this baby flies. This Ontarian (is that a word?) combo deliver hard and heavy but never lumpy. Imagine Rob Younger fronting The Dictators maybe and you can just tell from this that they be digging all the great stuff. Hell, there’s even a wee burst of Spinal Tap riffage in “Hittin’ The Road”. There’s a Wild Kingdom song and also two Groovies covers. Sounds like they had a ball thrashing it out as you will consuming "We're Workin' On It" at home with the volume set on stun.

The Knuckleheads are a high octane Croation garage-soul amalgam with a rough-arsed charm that just doesn’t quit. Not unlike The Fleshtones rassling with the J.Geils Band. Listen to their "Soul Flame" and "Yes To All" recordings and you’d swear they were from the Motor City. Check them out for yourself if you reckon I’m joshing.
Posted by Lindsay Hutton at 5:22 PM 2 comments:

Hey everyone, We have some great news to share. The first every public screening of It Came From Detroit will be shown at the Detroit Film Theater at the Detroit Institute of Arts on Friday, October 27th at 8pm! The Dirtbombs will start out the evening playing in the Rivera Court at the DIA (free with admission to the museum). Our film starts at 8pm and is $10. Directly after the show, The Witches and Outrageous Cherry will be rocking it on stage in the theater. We’re very excited to have the opportunity to show our film at such a great venue, and to share what we’ve been working on for the last four and half years. We sincerely hope you all can make it. It’s going to be a great night! Purchase Tickets at this link: http://www.dia.org/dft/item.asp?webitemid=843
Thanks! - James and Sarah
Posted by Lindsay Hutton at 1:57 PM No comments: 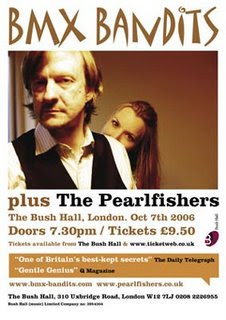 Image from the TFC message board.