Is this thing on...? It better be, because The Raunch Hands are back and "Bigg Topp" just fell off the Licorice Tree!! 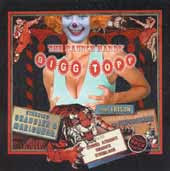 Can You Handle the Fireball??

"Once upon a time, The Raunch Hands were the best band in the world. Nothing has changed. MIKE MARICONDA, legendary producer and the most dangerous guitar player on seven continents, now living in Austin, Texas, had an idea. He began working on his latest Rock'n'Roll Blockbuster with a team of Texas players that came to be THE STEPBROTHERS. They had already destroyed every club in Austin. Now he had lined them up to record his Greatest Statement, a Powerhouse Odyssey of Rhythm and Soul!

But there was something missing... The grease, the action, the suave-as-all-git-out, kill'em all attitude of the RAUNCH HANDS!!!

Over twenty-years traveling the world with the Raunch Hands, Mariconda, with his team of MICHAEL CHANDLER on vocals and MIKE EDISON behind the drums, had developed a technique now known as THROWING THE FIREBALL. It was time to do it again.

Chandler was last seen in Brooklyn singing for his garage-gospel band CHANDLER AND THE CHASERS. Edison had been working in Manhattan as a pornographer, and traveling France and Spain with his outer-space blues band the EDISON ROCKET TRAIN. Mariconda sent them plane tickets and summoned them with these instructions:

Come to Austin. IT IS TIME TO THROW THE FIREBALL.

The result is THE RAUNCH HANDS' BIGG TOPP, a shocking dose of Rock'n'roll, Soul, Twang, and Power. It is more than a just a record, it is a Party Out of Control, a Biological Dirty Bomb, the The First Great Rock'n'Roll Statement of the 21st Century!!!

Says Mariconda: "There was no way I could make the best rock'n'roll record of all time without Chandler and Edison. Science has yet to find a substitute. Hide the women and children, The Raunch Hands are back."