Posted by Lindsay Hutton at 4:46 PM 3 comments:
A wee bit of NY culture for a (bloody wet here in Scotia) Sunday afternoon courtesy of the very Rev. Jon Hammer.
Posted by Lindsay Hutton at 4:15 PM No comments:
Suicide in The Jewish Chronicle (thanks Martin)
Posted by Lindsay Hutton at 4:02 PM No comments:
Just one more episode of the fifth and final season of The Wire to go. It's inspirational, compulsive and devastating in equal measures. I have some idea of how it all goes down but wonder if a TV show could ever match these heights again. Difficult to figure it. Lots of cool little surprises and shocks. I know that a lot of folks that drop by here are fans so I won't jabber any further. I need a little pick me up after all that so I'm gonna put on The Yum Yums and spill "live". 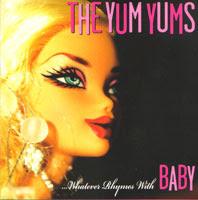 The new album "... Whatever Rhymes With Baby" is out on fab Spanish imprint Wild Punk. I believe that it'll also be released in their native Norway soon too. Anyway, there are 12 songs here of a calibre that could quite literally be issued as 6 double A side 45's. Plotting a path somewhere between Screeching Weasel and The Ohio Express, the sheer good-natured wall of ramonic pop will instantly pluck all the necessary heartstrings. The real not so secret weapon that pushes it all over the edge is the farfisa providing an overall crunch that's both mighty and familiar. It's true, you'll have heard stuff that sounds like this before, just perhaps not performed with so much gusto.

"I Wanna Be The One" sets out the stall and from there it just pummels through. "Sugar Rush" might have been a better title for the album because that's what it'll give you. Like eating a whole punnet of sherbet strawberries, you'll be bouncing off the walls. grinning like a fool. This here is a well-oiled machine with nary a hair out of place. "Let's Rock'n'Roll" is Slade duelling with The Barracudas while Sator pick up the pieces. Another one of those numbers for those of us that wish Sgt Poopydrawers never taught the band to play.

The Yum Yums may well be taking these hymns to the street by way of promoting this fine "record" so watch out for that. This is an album for kids of all ages and in terms of a mood lifter, they don't come much more potent than this. It sounds like they had a riot making it and that kind of thing is infectious.
Posted by Lindsay Hutton at 2:49 PM No comments:
Newer Posts Older Posts Home
Subscribe to: Posts (Atom)