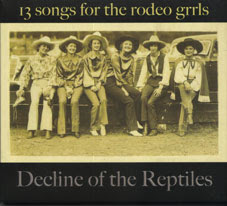 “13 Songs For The Rodeo Grrls” by Decline of the Reptiles kicks off with a curveball of Doobie Bro-esque proportions. The mature white soul Americana kind of sounds good on them actually but fear not, the remainder returns to the more familiar terrain of BOC-tinged meets Glasgow’s Primevals eminent rockology.

“Respectfully dedicated to James Darroch and Allan Marr” – this latest I-94 Bar release indicates there’s plenty of life in these old dogs and for my moolah, this baby trumphs the last Birdman album at its own game. Nobody infuses those spiritual Detroit stylings like the Australians. Sweden does pretty good but there’s an edge present down under. Even something like “I Confess” that sounds like Don Henley channelling Kill City period Jimmy O.

“13 Songs...” is some grandiose rock action that isn’t too far away from potential stadium variety. I imagine that the term veterans could be applied here but this is anything but a tired attempt at putting a bunch of songs together for the hell of it. The length and breadth of the album is vast, I mean - nobody could have predicted the mutant Acker Bilk shapes of “Penelope”.

Could they?
Posted by Lindsay Hutton at 11:24 AM 1 comment:
Newer Posts Older Posts Home
Subscribe to: Posts (Atom)