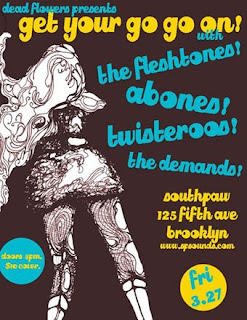 Plus they just added The Lyres! Fruggin' 'ell is right. It's gonna be a danceatronic night at Southpaw in Brooklyn this coming Friday. What a bill (milhizer)!!!
Posted by Lindsay Hutton at 11:31 PM No comments: 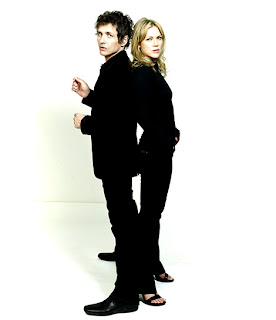 Dean Wareham and Britta Phillips will be performing the UK premiere of
Dean & Britta: 13 Most Beautiful ... Songs for Andy Warhol's Screen Tests
…in Scotland. Not in London. Not in Glasgow. Not in Edinburgh. The venue for this event is Carnegie Hall in Dunfermline, Fife.

Home of The Skids, Suicide played there twice with The Clash and Elvis Costello respectively. Nazareth and Fay Rezillo also hail from there. How do you think she got her name? For those overseas, "fae" means from in these here parts.

Quite a coup for this prestigious venue, the small capacity will make this an incredibly intimate event, you better grab those tickets fast.
Score them beasties from http://www.ticketweb.co.uk/ or via 01383 602 302…
A way more attractive proposition than standing in some field watching last year’s thing jump through hoops for a molto paycheck.

“13” is a multi-media presentation where Dean and Britta perform onstage with their band while the Warhol films are projected overhead.

A project jointly commissioned by the Andy Warhol Museum and Pittsburgh Cultural Trust for the Pittsburgh International Festival of Firsts 2008.

Superior class entertainment that offers sophisticated pop thrills in terms of art and music. If you're not familiar with Dean and Britta's music that’s perfectly OK. Check them out right here.

The recent Warhol exhibit in Edinburgh broke visitor records and this will undoubtedly be a hot ticket. Don't let the art crowd grab them all.

So there you go, Fife or France, what's it gonna be? This is certain to be the most exciting night in the kingdom since Ben Vaughn played The Path Tavern in Kirkcaldy.
(Please spread the word. Cut and paste away. This is the closest the Velvet Underground ever got to Dunfermline.)