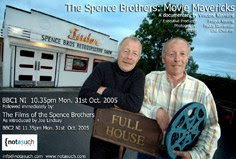 From Agent Killen in Belfast, anybody with access to BBC Northern Ireland should keep a lookout for this being screened tomorrow night (31st)...

"Noel and Roy Spence are twins who've been making their own films for about 50 years -a lot of them were local stuff about the building of by-passes, motorbike races etc but they're also rock'n'roll fanatics and they made some horror shorts which apparently had lots of cardboard props and they tended to try and get a jiving scene into all of them - they told me once that in one movie they made the male "actors" wear cardboard sideburns to make em look more rockin'. Back in the 80's they made a film called Greenisland Rock which was about the rockin' scene round Belfast but mostly centred on a family of Teds who'd started a Rock'n'Roll society in their local community centre for the kids who were too young to go to the bars in Belfast -A whole 'nother world. The other thing about them is that they've each built their own cinemas at their houses with stuff they salvaged from cinemas that closed (complete with ticket office) - the cinema in the pic is one of them. last time I was there they showed Attack Of The Giant Leeches - pretty typical fare for them."

More info HERE!
Posted by Lindsay Hutton at 9:09 AM No comments:

Got this info from Max at Aerocccp Records...

"We are a new small record label based in NYC and our first release is Messer fur Frau Muller "Triangle, Dot & Devil" That's the project out of which Messer Chups developed... you can check out a couple of their mp3's here".

Top-grade, twisted-natured cut and shut post-lounge soundtrackarama. the kind we like. More info when I hear the whole kaboodle.
Posted by Lindsay Hutton at 7:56 AM No comments:
Newer Posts Older Posts Home
Subscribe to: Posts (Atom)