"On Wednesday, June 14th 2006, at 6am, the government Inspectorate for the Environment and Spatial Planning brought an excavating machine to the Autonomous Cultural Zone Metelkova, Ljubljana, to tear down one of the buildings of the converted ancient army barracks which they consider to have been erected illegally. The cultural workers and supporters of Metelkova prevented the action. This attempt to destroy one of the liveliest cultural and intellectual locations in Ljubljana was the third in these past few months. Various inspections have recently intensified their interventions during cultural events at Metelkova.
The government of Slovenia is acting in accordance with a recently passed law on catering industries. Under the cover of its strict provisions regulating commercial activities, which cannot be fulfilled by the non- profit associations and NGOs of Metelkova, the executive might as well put an end to the largest agglomeration of alternative cultures in the country. Metelkova provides 40% of the non-commercial music events in the city.
Its attendance can favourably be compared with that of the established Ljubljana Festival. It is the second largest provider of cultural events in Ljubljana. Metelkova is the only location in the city, and one of the few in the country, where youth cultures and alternative cultures are systematically produced and presented to a large and active audience. It is also a forum of impressive intellectual irradiation. During each academic year, it organises the Workers' Punkers' University where the most urgent dilemmas of the contemporary world are discussed by competent international speakers.
Metelkova recently hosted the annual meeting of TransEuropeHalles. During the 13 years of its existence, projects at the Autonomous Cultural Zone Metelkova have been supported by the Ministry of Culture and by the City of Ljubljana, as well as by many international sponsors. Producers from Metelkova have been participating to Documenta, Manifesta, Sao Paolo Biennial, Venice Biennale, Wiener Festwochen? Many international festivals held in Ljubljana locate part of their activities at Metelkova: The City of Women, The Other Music, Jazz Festival Ljubljana, Trnfest? Metelkova has been presented as an outstanding phenomenon by international media: ARD, Arte, BBC, Belarus' State TV, Die Zeit, Falter, Feral Tribune, Los Angeles Times, ORF, Russian State TV, Seattle Times, ZDF? Metelkova is a squat initiated in 1993, when a group of alternative producers and activists occupied the ancient barracks of the army headquarters near the centre of Ljubljana in order to prevent its illegal destruction, which was launched by still unknown agents presumably led by speculative real-estate interest. Although it has never succeeded in achieving a proper legal status, the location was registered as national cultural heritage in 2005. ACZ Metelkova is under attack. Its people are ready to defend it. They need support. Please circulate this information.
If you want to express your support, please write to the Prime Minister: Janez.Jansa@gov.si and to the Minister of Culture: vasko.simoniti@gov.si"
(Thanks to Bigor for the info)
Posted by Lindsay Hutton at 7:04 PM No comments:
FREE PHOBICS GIG SATURDAY 17th JUNE at THE PLOUGH INN,
173 Wood Street, Walthamstow, London E17 3NU

"They say Charity begins at home and thank gawd you lot didn't stay at home for our last gig at The Dublin Castle - huge thanks to everyone who turned out despite the heat, the Portugal match being on TV as we were hitting the stage and the £5 entry fee. The Cancer Charity made a few hundred quid thanks to you so well done. Cheers to Steve for setting it up and to everyone who played, came along, and helped .

Down to business again, gentle reader and as a reward for your charity work our gift to you is a FREE gig this Saturday. Yup, thats right FREE!!! England have qualified for that World cup thing so put down those worry beads come along and be entertained at the mind expanding rovers return that is the Plough in Walthamstow. We'll be on stage around 9ish.
We've been invited back to play with ED TUDOR-POLE by special request! We musta done something right at the first gig, or we owe someone money - come on down and find out! Hey if we're lucky he'll get us to join him at the end of his set like last time to rip through the classic "Swords of a Thousand Men" now ya wouldn't want to miss that fer nothing would ya. A word about Ed - he is a true national treasure and will entertain you throughout and hit you with a bunch of ace tunes too.

The Plough Inn is located directly opposite Wood Street British Rail station, one stop from Walthamstow Central or about 15 minutes from Liverpool Street mainline.Bus 230 (from Wood Green) and W16 (from Leytonstone underground) stop outside the venue. Bus 56, 257, 357, W12, W15,W19 also stop nearby at Whipps Cross Hospital, a short walk away.

So an entertaining night is in prospect and it won't cost you nuffink mister or mistress, watch this space for news of upcoming gigs and other fine events too"

tom
Posted by Lindsay Hutton at 6:57 PM No comments:
Here's something that gets my goat. The use of the word "excellent" as a platitude, generally used by arseholes to convey a faux positive response to whatever pointless drivel that might spew forth from the "person" on the other end. Scoring a fat zero on the sincerometer. It was fine in Wayne's World. It's like the expression "dude". UK dialects can't deliver these words. Why can't your average gimp give some consideration to what comes outta their trap? Particularly if they're within my hearing range? Is that too much to ask?? I personally and actively loathe the spurious nature of general conversation these days because it rarely gets past the loop mentality. They only have a number of standard phrases and repeat them ad nauseum. I'm sure that your average talking toy would present more in the way of variety. I make like a trappist monk (complete with tonsure) rather than get into some bogus dialogue with someone who I'd rather not be around let alone talk to or confide any of my business however meaningless. Call it my inner (and outer) Larry David taking hold, it rarely steers me wrong. Anyway, it's Friday night. I nearly went into Glasgow but decided to hole up in the bunker instead. This time next week, i'll be doing something altogether more fun, with people that I like to be around - so energy and funds require to be conserved. I'm slowly making my way through a pile of cd's and must go and make a note to go get a stylus tomorrow. Not sure from where but that's an important quest. Wish me luck.
Posted by Lindsay Hutton at 6:33 PM No comments: 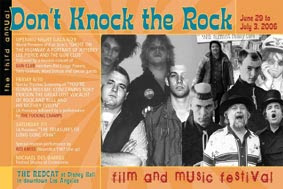 If you're on the West Coast (USA) then you won't want to miss a minute of this. Except for the Roky film. Actually no, go along and ask the "director" what his problem is? They have a Gun Club film and tribute performance, The Monks and Long Gone John also appear on screen plus a ton of other great stuff. And to top it off, Redd Kross live. Why can't somebody organise a happening like this here?
Don't Knock The Rock,
June 29th - July 3rd 2006
Posted by Lindsay Hutton at 6:26 AM No comments:
Newer Posts Older Posts Home
Subscribe to: Posts (Atom)