Posted by Lindsay Hutton at 12:16 PM No comments:

Del Lords.com... 'nuff said. Where a wee Christmas song awaits you.
Posted by Lindsay Hutton at 8:10 AM No comments: 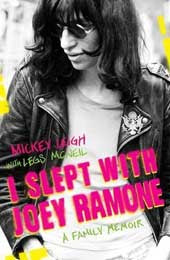 I imagine that a lot of you folks like me, will want to read this. Take a look at the line below the title – “A Family Memoir” – there’s a clue in that as to what you might expect. I’m not going to spoil is all for you by giving an opinion on the whys and wherefores. What I will say is that I consider it to be a little intrusive with regard to Joey’s medical history but that’s Mickey and his brother’s business. I found it compulsive reading and uncomfortable at times. The end is pretty devastating and well written to that end. It’s not entirely about the guy that changed the world view of many of us. The person it portrays as Joey Ramone will very possibly be at odds with your opinion. It certainly is with mine because for all the times I met him he never acted like the individual in this account did on occasion.

It brought me back sharply to the last time I saw Joey, Johnny and Dee Dee together. It was at the door of Joe’s building when they were all waiting on him to come down and get in the van. To go to some upstate gig that quite possibly wasn’t that well attended. The interaction is described fairly well here and my own personal altercation with John would happen several years later when he whined about my opinion of “Odour Eaters”.

Some of the descriptions of the little things that Joe did really made me miss him a lot. Of course, living with the guy on a daily basis would have been different from maybe seeing him once a year but still, I feel privileged to have known him just a little bit and it allows me to get under the surface of some of this. The way that the End Of The Century film made me accept John for “what he was” despite our differences in the end is given another perspective here. The description of his ability to bear a grudge is something I can concur with. Still, it was pretty exciting being recognised by him in the Chelsea post office as I waited to mail postcards home one time. There can’t be many people left that believe that they were actually a “happy family”.

I hope that writing this helped Mickey get whatever it was he needed to get out of his system good and gone. The process was probably uncomfortable to recall and this is more about him than it is about his brother. It’s also about the dysfunction that fuelled what led to the moulding of the best singer of a generation, blank or otherwise. Leigh was there to see it all come together and The Ramones continue to be perhaps the most radical example of something exceeding the sum of its parts ever to clamber on to a stage.

Something I did learn that I should have known was that STOP played at the Cas Rock in Edinburgh way back whenever. Maybe I was off gallivanting but still...

It would be good to get a wee discussion going here as to what you folks thought/think/etc. You may disagree entirely. Let’s hear it.