It’s always a bit bumpy on the first day back after a baby cow (or Wee Calf as we say here). The time went past in a blip and several things conspired to end yesterday on a downer. Still, I believe there’s still no means of unscrambling eggs so one just has to deal with damage limitation and attempt to make sure that such events are not repeated. The learning curve of existence is quite possibly something that no-one can manoeuvre without the requisite scrapes.

What is it now? Three weeks on Sunday until the big Hammersmith do? Who’s going, what show, that kind of thing? I have two standing tickets for the Monday that I’m trying to shift for a friend overseas that can’t make the scene. I’m not sure that show is sold out yet but I think the downstairs is. Face value, £30 a pop. I have the tix in my custody so they’re not imaginary.

There’s a facebonk campaign going to make “Anarchy in the UK” # 1 during the week of the election. They’re doing it for Malcolm. I think he’d prefer Bucks Fizz’s “Making Your Mind Up” myself. Were they any less manufactured than the Pistols? Perhaps not. The whole country will be in the full throes of a closing down sale the week afterwards anyway. That bumpy I was talking about before is poised to get a whole lot bumpier.

Posted by Lindsay Hutton at 6:23 PM No comments: 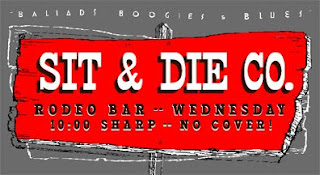 Susquehanna Industrial Tool & Die Co. returns this week to the honky tonkin'est joint in town, the Rodeo Bar -- accompanied by our special guest singer, Rosalie Morris! Cold beer, Tex-Mex cuisine, and all the peanuts one can eat, you betcha... WEDNESDAY, APRIL 14th / RODEO BAR / 375 Third Avenue (at the corner of 27th Street) in Manhattan /Two tax deductible shows, from 10pm sharp until 12:30am / No cover!

Plus, in a rare Quaker State road trip, we'll be in Philadelphia on Saturday, April 17th, at the Fire -- as guests of our swingin' pals Delco Nightingale!