"All the way from America. Combine a splash of surf, a pinch of rhythm and blues, a few fistfuls of soul, a whole lotta 60's-inspired rock n' roll, and you get the musical phenomenon that is The Woggles. From songs that shake the rafters to shows that tear the roof off, The Woggles are a four-man delivery system for 200-proof butt-shakin' r-o-c-k."
Posted by Lindsay Hutton at 3:19 PM No comments: 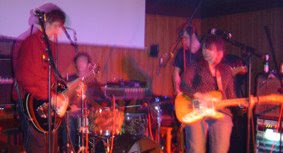 Amy Rigby's first UK show with a purpose built band kicked off last night at The Riverside Club in Glasgow. Considering this was the combo's first public outing it all went off swimmingly. Much of the set was culled from the latest album, "Little Fugitive" but there were also airings of a full-scale "All I Want" plus a groovin' flamey "You Tore Me Down".

By the time these folks get a few shows notched up this is gonna be a nifty outfit. Skewing away from the trad country path and into twang pop brush. Catch the show in Edinburgh on Saturday at Cabaret Voltaire in Edinburgh. It starts at 7pm.

Sad to hear that The Weirdos had to cancel their tour with The Damned because of personal stuff. It was the main reason for going. Also Patricia Morrison isn't with The Damned either. Bummer. Just have to close my peepers and let the ol' soul drift over to Ljubljana where The Nomads will be tearin' it up as only they can.