Ixnay what I was saying before about putting something together with regard to reviews. Something much more exciting has turned up since I switched this thing off earlier to do the ironing. Wreckless (W)radio is on the (cyb)air!

Stop what you're doing, what you're listening to and tune in. You'll be very glad you did because as entertainment goes this is a cut (and thrust) above!

I don't think "immense" is too strong a word under the circumstances.
Posted by Lindsay Hutton at 7:01 PM No comments:

The answer is 5. Paying customers into “Gun Crazy” that is. And what a great looking piece it is on the big screen too. However, that was yesterday.

Today I woke up in a sort of tizz and it seems to be hanging on. I thought that I’d have breakfast whilst reading the latest Mojo, the cover of which rankled me. It says on there that Kings Of Leon are the biggest rock band in the world. I find that depressing in so many ways. A “rock” equivalent of Take That in my opinion.

Actually, I almost prefer TT because they’re not trying to kid anyone that they’re worthy as they hoover up the cash. Anyway, what’s the point in complaining? In that universe, demographic is paramount and if having these muppets on the cover sells a few copies then that’s the crumble from that particular cookie. Their fans might discover something else and figure out just how tepid KOL are. Where did that burst of optimism come from?

It could have been equally bad, The Killers might have been on there. That name should be reported to the trade descriptions people. These are acts that can play festivals that sell out before the bill is announced. thus providing bogus points in perceived popularity. Jonna Lee made one of their songs listenable, a bit like Astrid Williamson did with “Run” by another mega-popular group that just keeps sucking - Snow Patrol. Time for some actual music then methinks.

I’ll be back with that soon - meanwhile pretend there’s an ad break or something.
Posted by Lindsay Hutton at 11:34 AM No comments: 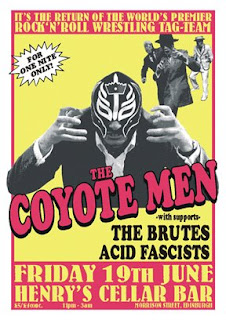