I started to watch that TV gabfest last night. Then the next thing I can remember was waking up to hear it being discussed on the news. The narcoleptic episodes appear to be gathering pace and it’s not just limited to encounters with political debate. Got a lot to do before heading “souf” for the clan gathering so I better get to it. Mayday in this instance is not a distress call.

Would have liked to attend the launch of the new Eagleowl release in Edinburgh tonight at the Roxy Art House but it’s not possible. Don’t let that stop you though, this is kind of short notice I know but it’ll be worth it.

Trying not to disappear up my own hint end here, I shall take my leave. Hope to run into a bunch of you kids over the course of the next few days. My mobile phone skills, as some of you know, are not entirely proficient so bear with me. At the very least, I’ll attempt to remember to switch it on. Then there’s the problem of hearing it but don’t get me started on that.

Time is sure rattling on and my ability to keep any kind of beat on any of this is slipping. It’s an age thing and the recognition that it’s a precious commodity makes the fact that it’s disappearing like the proverbial off a shovel seems to accelerate the process.

For those “around the doors”... perhaps you could take in this... info just in from Mr Spence. 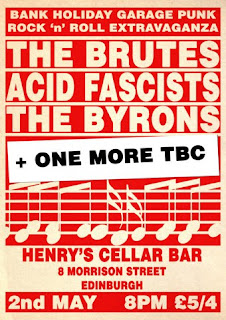