The Euphoric Haze of Wurlipalooza IX

September 25th... I left a driech, wet Edinburgh and arrived in a bright, hot Madrid pretty much ship shape and Bristol fashion by noon and raring to go. The taxi trip in was quite humbling. How many times have I been here and I can barely communicate with the taxi driver, an old guy who was excitedly pointing out landmarks while his radio played some Spanish station. It’s usually FM rock bombast but this just seemed much more right. Quite the welcome!

First stop was to meet Brother Marco Padin and pick up the long-awaited Dahlmanns 45s. He took me to a 50s style diner modelled someplace between American Graffiti and Cry Baby called Tommy Mel’s. The colour scheme reminded me of this video by The Pantones. Ghost Highway Recordings flies the flag for proper rock’n’roll. Creating desirable vinyl artefacts for the discerning listener and “He’s A Drag” in black and yellow wax versions is definitely one of those.

The jaunt back on the Metro was an adventure. 150 45s is a weighty proposition but the exercise likely did me good. Then, Marco figured there weren't enough copies to fulfil the pre-orders so I had to give him some back. Not a bad problem to have.

From there to my pop-up office in the illustrious La Fiambrera for the first Mahou of the day, it went down nicely. It hardly seems possible that it was just a year since the ladies secured the property and they’ve scrubbed it up real nice like. It’s a sweet spot.

There was record-bagging to do so I returned to the hotel and saw to that. Seth Gordon and Robbie Rist were playing at a new place – Phantom – just around the corner. It must have been called something else before but I’d never clocked it before.

Sara and Ramôn joined me for a cheeky wee pre-show sherry at La Venencia. I love to hang out with these kids. The show was very entertaining and how crazy is it that you have to travel to Spain to hear a little Edison Lighthouse? Trochled up to Wurlitzer from there and met Álvaro and Helena outside. It was nice just to take the air and blab. No more drink was taken and I think that was probably a good thing.

This meant that I was able to swing around to Munster early then LF for a smashin’ wee pastie breakfast. Dropped by Wurli where an American girl was trying to communicate with the Ukranian cleaning lady. It was not going well. She’d lost her purse (and her mind) the night before and was about to leave town. I told her that if it was in there then she would definitely get it back and gave her 20 euros to tide her over. The Dahlmann entourage arrived and then things began to move into gear. 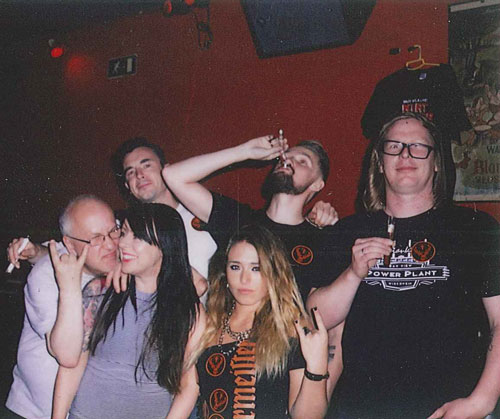 Showtime and I liked Grupo Sub 1. They knocked out a version of The Avengers “We Are The One” that really did the original proud. At that point, I had to nip out and pick up a surprise guest from MRC and that was when the party really kicked off. The gang was all present and correct. Marcela came too, despite her recent crushing workload. We never made it to El Sol this time around. Got back to Wurli to catch the end of Kurt Baker's set and then it was time for The Primitives. The evening, or night rather, was in full swing at that point. A wee wander up to WEIRDO! BAR with the kids for a cheeky wee gin and tonic where I met the new proprietress, Susana. Here’s to the place continuing its unique twist on the Mad-Toon night circuit.

I believe we also stopped off at Mongo - a new joint - but it was closed so we made our way back to base camp (Wurlitzer). 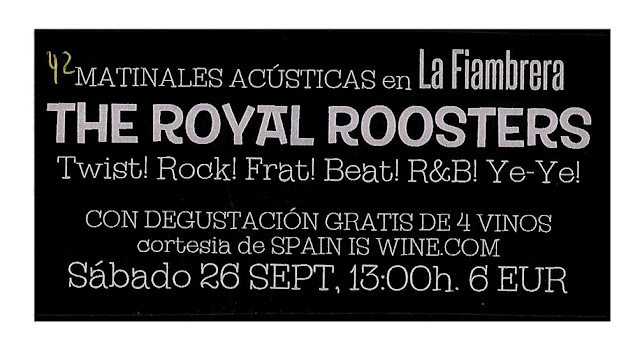 It was Saturday already, hell it was well into Saturday when we called it a night. A 1pm date had been made with The Royal Roosters (look out for their single on Soundflat) at LF. A swingin’ way to spend a lunch time to be sure and excellent to experience the basement speakeasy in all its bricktastic glory first hand.

Time just barrelled in from there... Managed to get down to La Alegria where Gry took a picture of herself in the exact same place as Line sits on the Drag 45 cover. Ms Blanca, who shot that very image also came out to play. Great to meet the exquisitely-monikered Aretha Croqueta too. Talking of that delicacy, many were consumed across this all too short visit.

Managed to catch FAST FOOD. I never realised that The Ant was once a member until Javi gave me a CD. Zipping through the opening set, they really set the scene for the D’s perfectly. What they do might seem simple but I know it’s not and they really pulled off that Ramone splendour.

And then it was time for Los Dahlmanns. Line told me that this was her best experience on stage ever and you could tell that from the get go. The anticipation of this for all concerned was up a notch even from usual and they just fucking nailed it perfectly. The length of set – the sequence – and even a late addition of “I Want You Around” for The Manges just pummelled the crowd with what is quite probably the greatest pop and roll ever delivered anywhere. As ever, I admit my bias but if you were there then you know.

The inclusion of “Girl Band” and “Tear Me Apart” (the latter to appear on the next WFMU Superhits of the Seventies comp that Michael Shelley is preparing now) was just the proverbial icing on a particularly groovy cake. The sense of utter joy at the front of the stage will be hard to ever replicate. I outright plotzed several times and this was up there with The Ramones at Glasgow Barrowlands in June 1985. I swear to Joe.

One of the Manges geezers said to Line when she came off – “You expect us to follow that?” And I think you pretty much get the gist. And they made an admirable (screamin’) fist of doing so. They were also big fun to hang out with at the pub down the Cruces, I hope to make their acquaintance again. The bass player, Mass reminded me of my old pal Lou Whitney. T'was a night that I certainly never wanted to end and I think we gave it a good go. One of the all time great times.

Yours truly was like a burst ball after all of that but I was determined to show Gry more of my favourite city. Then it was time to eat at Calle 30 and then to make for the airport where it all came unstuck due to a mix of fluster and stupidity on my part. The perfect, pleasant end to the weekend was cruelly dispatched. The MRC contingent was travelling from another terminal and fate dealt me a cruel blow that Sunday evening. I can see Andre now reciting the word “idiot” to our fellow crew and I plead guilty as charged. So that was it, the very bestest of times ended pretty sourly and a hard lesson was learned. It was for all the world like some twisted season finale.

But here’s to the next time. Wurlipalooza 2016 will be the 10th Anniversary. Pencil that in for the last weekend in next September and come join in.
Posted by Lindsay Hutton at 8:29 PM No comments:
Newer Posts Older Posts Home
Subscribe to: Posts (Atom)