As I hunker down here until the Christmas bomb drops, Bob Dylan is playing The Sonics "Don't Believe In Christmas". I'm thinking, he's playing my song... I was hoping he might play The Skeletons version of "Do You Hear What I Hear" but hey, y'cannae have everything...
Posted by Lindsay Hutton at 5:24 PM 2 comments:
On this, the twentyfourth day of December in this year of two thousand and six, much of the world is waging war in the high streets. They’re reporting on the radio that yesterday was the highest spending day in quite a number of years. What the fuck are these people buying? It must be stuff that I don’t see. Either that or it’s just anything to muster up that buzz. Anyway, if you’re reading this then maybe you’ve escaped. Good on you if you have. I know how hard it is not to get sucked into the bullshit. Or do I? Anyway, I’m not that shucched about coming over as a miserable bastard. Certainly not to those who don’t want to understand that it is possible to opt out. Live and let live, have a high old time if you want to. Eat and drink your way to oblivion and pass out on the couch. Tis yer prerogative after all. Wonder if they’ll show Charlie Drake on the telly news shouting “ ‘allo my Darlings!”. That’d take me back. 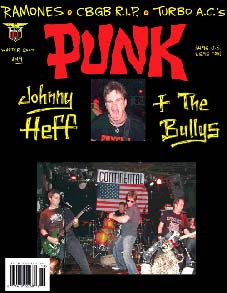 Anyway, I’ve been looking at the reactivated PUNK magazine. Ms Amy Allison scored one for me and sent it on over. It’s no secret what an inspiration on NBT that the original was. Mr Holmstrom’s handlettering that made me think that maybe I’d get away with that, not being one for typewriters and all. Put that together with a pile of papers stapled in one corner and whaddaya got?

#19 has come out on the tail end of the whole CB’s shutdown. The word PUNK has changed out of all recognition but the fire is obviously still in the belly of it’s publisher. You should support John Holmstrom because if it weren’t for him and his crew then a lot of what you know (and cling to) simply wouldn’t exist. The photo of Dee Dee wearing a Lynyrd Skynyrd t-shirt is worth the admission price alone. Hopefully future issues might feature Kitty and the Kowalskis, The Star Spangles and the new front-line of rock’n’roll that NYC has to offer... See to it that the title has that future.
Posted by Lindsay Hutton at 12:37 PM 1 comment:
RIP - Charlie Drake
Posted by Lindsay Hutton at 11:09 AM No comments:
Newer Posts Older Posts Home
Subscribe to: Posts (Atom)