Some years ago (30-ish) I had the good fortune to release two albums by a band called The Skeletons. A combo that is as good or likely better than your favourite act could ever hope to be. They achieved the seemingly impossible but never became a household name because the “industry” didn’t have a clue what to do with them. The band’s drummer was a fella by the name of Bobby Lloyd Hicks and he passed away during the early hours of Sunday morning.

In musical terms, he was a drummer’s drummer.
A humble, quiet gent that laid down an understated beat that was never beat. I was lucky enough to find myself in his company a number of times during these three decades and when I finally made the pilgrimage to Springfield, Mo. – the buckle on the bible belt – Lloyd showed me around. He even took me to the site where Kay took the shot that became the cover of “In The Flesh” and snapped me in front of that famous (on my planet) wall.

I recall a particularly convivial evening over at his house. From there we went on a wee road trip up to the Chicago city limits that was quite an adventure. I remember vividly sitting outside the back of the hotel in Dekalb with him beside some railroad tracks that conjured up an image of the old (mid) west. Later that same year, I caught up with them in Malmo on a bill that boasted a Skele set then they backed Scott Kempner and Dave Alvin. Uncle Tupelo were in attendance at the Heartbreak Hotel, the name of the venue.

There was also the legendary Glesga Grand Old Opry show with Dave and The Guilty Men. I brought them from London by train which was quite the logistical nightmare but they took it in good spirits. We’d sold (lucky) 13 tickets in advance and it looked like a bath might be taken but nope, more than 200+ walked up and we paid the band and the bills. Dave sung a couple of verses of “Trans Am” (after one particularly noisy wee bugger shouted for it) with two actual Skele-alumni in the crew and well, we all had a ball. You can probably guess who the shouter was.

Lloyd would often wear an NRBQ t shirt. He did that so often that he joined the actual band for a while. Amy Rigby was thrilled to catch them at a friend’s wedding not too long ago. I guess that was his last gig before he had to give up for health reasons. The last time I met up with him was when he was in Glasgow with Steve Forbert. We traipsed around town before he had to fulfil his stint in the band.

As you may have read in Rich Nesin’s heartbreaking remembrance, it was The Skeletons association with Forbert that provided the portal for so many of us to discover this Midwestern Wrecking Crew.  It all came full circle when Andy Shernoff had them sit in for his "Not Fade Away" EP. Listen to them swing on “Let’s Get The Band Back Together” and weep because that can never happen again in real terms.

Lloyd’s regular sign off was “Fins Up” and he wouldn’t want us to be sad. This geezer was a solid example of how success should never be measured by what you’ve got. Like the Sonny Bono song them Skeletons interpreted suggests “it’s what you are” that counts and Mr Hicks is one damn hard act to follow on that score.

My condolences to his family and friends scattered worldwide. 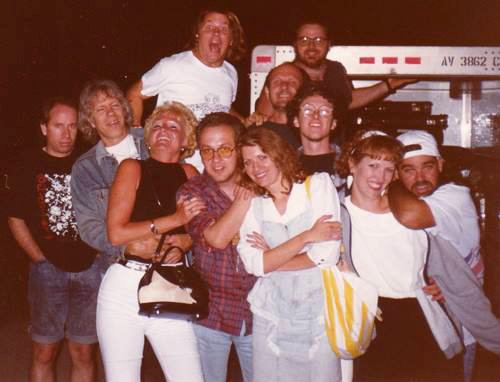 From that 1992 road trip, I think the place was called Shades, somewhere
outside of Chicago, pretty sure I have a flyer someplace.
Posted by Lindsay Hutton at 6:52 PM 2 comments:
Newer Posts Older Posts Home
Subscribe to: Posts (Atom)