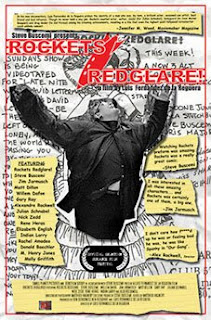 I just watched the Rockets Redglare documentary, courtesy of the good offices of Sir Martin Percival. Something I always meant to search out and the recent resurgence of the name via "Who Killed Nancy" made it sort of timely. It's no cakewalk in terms of entertainment and the guy was quite obviously damaged to put it mildly. The presence of Steve Buscemi and Jim Jarmusch in the film give it a pertinence. Indeed when Buscemi talks about working with the Fire Department reminded me of the Rev. Jon Hammer telling me about Michael McMahon's encounters with "Fireman Steve" at clubs in the eighties.

There are very few things that I can say that I'd watch at home rather than see on the big screen but I think this could be a major downer in a theatre setting. I've seen my share and even been involved in a few train wreck type associations in my time but this guy took that to a whole 'nother level. It as if he was doomed from the get go. Still, he seemed to remain fairly upbeat despite the varying degrees of degradation and squalor he chalked up.

I know some of you folks met or knew (of) him, did you see this? Did it paint a true picture?? I dunno, it sort of bummed me out and I don't need that right at this minute. The Sundance Q&A with the director really gives credence to Eric's rant from yesterday. Don't tell me you didn't click on that? He's got the number of the "special feature" phenom and no mistake.

I wish I had a copy of "The Wrecking Crew" to bring me back up. Talking of which, there are screenings coming up in Cleveland (Ohio not Tyne and Wear), Florida and Alicante. Details here. A couple episodes of Car 54 are required to restore some kind of faith in the human condition. Maybe a Honeymooners too. Thankyer and goodnight...

Update 21/3 - Just incase you don't scan the comments, here's first hand info from The Hound.
Posted by Lindsay Hutton at 9:24 PM 1 comment:
Found this via Angel's place. One of my favourite songs of all time...

Posted by Lindsay Hutton at 6:22 PM 1 comment:
It's practically Friday so let's just approach that quietly. While half the world is in Austin, I know for the fact that HS ain't there so we can just watch these great clips in the hope that they're gonna come out this way soon. Beware though "Arjeplog" cuts off pretty brutally. I was looking for Maia's appearance on TV last night to pre-empt the album but found these instead.

I'm planning a sort of write-o-thon this weekend. Let that be a warning.
Posted by Lindsay Hutton at 6:10 PM No comments: 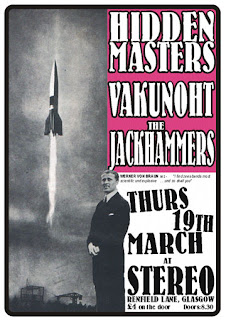