AN INTRODUCTION TO DISCO/GARAGE CROSSOVER 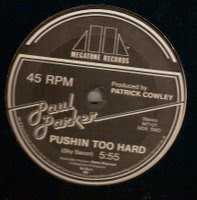 Earlier this week I picked up a 45 by Amy Bolton on the Importe/12" label, it was cheap, it "looked" right in a late-70s-NYC-DIY kinda way, but it turned out to be just a halfway decent disco tune. Imagine my surprise tho' when I flipped it over and discovered a pretty solid stab at the Music Machine's Talk Talk. No disco, just a pretty straightforward take that in other hands might have made the recent Children Of Nuggets box-set. Anyways, this got me thinking; "was there ever any garage/disco crossover?". Obviously the answer differs with whatever your definition of "garage" might be. But I'd say that Boney M coverin' the Creation's Painter Man is as a good a starting point for creatin' a discography of this new founded genre as any. Farian & Co. also took a stab at Still I'm Sad, but still, that's strictly British invasion material (as is Santa Esmeralda's Don't Let Me Be Misunderstood), and I was wonderin' about the garage stuff.
One disc that might qualify is Barry White's 1980 version of Louie Louie. Close to eight minutes of aural hell. Imagine the soundtrack to a party scene in Porky's Revenge or some such flick, all eighties horns 'n syndrums. Freighting doesn't even begin to describe it! Weirder still, but not necessarily worse is Paul Parker's 1982 version of the Seeds' Pushin Too Hard. Produced by Patrick Cowley, this is one of those Hi-NRG/gay disco kinda things. Hardly up there with either Giorgio Moroder or Bobby O, but nothing you'll instantly hate either. These are only two discs I'm aware of, but there's gotta be more. So I'd like to tax the collective mind of you NBT readers in wonderin' if there's any other examples of this under appreciated sub-genre out there...
Posted by Jeroen Vedder at 10:30 PM 4 comments:
“I don’t worry about a thing because I know nothing’s gonna be alright”, reckons the great Mose Allison. Well I’m well and truly on that bus. One good thing happened today and that came in the form of Steve Wynn and The Miracle 3’s “… tick…tick…tick” but more about that after a half dozen circumnavigations of said disc. Right here, right now the reviews for Mose’s lassie Amy are beginning to trickle in ahead of her imminent arrival upon these shores. She has a unique voice, granted but has nobody listened to Antony and the euphemism for multiple boaby’s? For fucks sake, memo to would be reviewers – if you don’t like her voice then try to temper your inability to find the expression that doesn’t include the word “nasal”. “Everything and Nothing Too” is a corking album with great songs, mostly written by Amy. Some recognise that but there’s an inherent philistinism (is that a word?) running rampant through what’s left of the business that won’t give something that sounds a little different a chance.

Her singing will get to you, if it doesn't then I fear for that ticker of yours. But then, most of you folks are open. You’re in this for the long haul, not a flakey scenester that changes horses mid-race. I tell Amy that reviews mean exactly f-all in this day and age. The people who matter will decide for themselves if they can actually hear the music. Those that still buy music or go to shows. To that end, please visit Amy’s site or Shoeshine and decide for yourselves. You’d be doing me a great favour by sending the links to any of your friends who might be interested too. Let’s try and build this thing from basement level up. Remember real songs? Well here’s a wad of them for your listening pleasure made by somebody who cares about pop music from a bloodline that more or less started what we’re all addicted to. Good music. Yeah? Yeah.

Everything is fucked though basically, I just tried to take a walk down the docks here in Grungemooth and find that it’s become something of a stockade. In these times of terrorism, pestilence and rampant arseholism (not necessarily in that order), one can no longer amble down to the dock gates, or take a shortcut to the old town because it’s become a container haven. It’s good that the docks seem to be in business again but not like this. In the not so distant past, when people had to make their own entertainment, families would walk down there of a weekend. It was a well trodden social path (as opposed to sociopath which I think might be a relevant tag for me at the minute) and not exactly for imbibing fresh air since the advent of the oil refinery but a brush with nature nonetheless. A good route for a bike ride also but all of that is off limits now. Probably for our own safety of course because there’s a telephone book thick set of regulations for everything now. I’d probably need to have a risk assessment carried out on me before I could cycle that road now. Whatever happened to common sense? When exactly did it leave the building? Did it hightail it with Elvis and I’ve only just discovered it?

So Mose foretold all this. "Nothing's gonna be alright".

And, it’s getting worse by the minute.
Posted by Lindsay Hutton at 4:45 PM No comments:
Newer Posts Older Posts Home
Subscribe to: Posts (Atom)