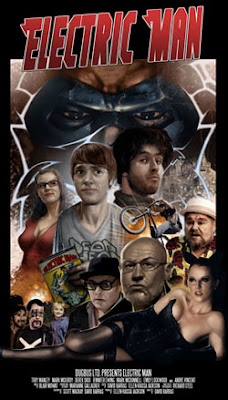 I caught the first of two screenings at the Hippodrome of "Electric Man" on Friday night.

It’s a low-budget flick that describes itself as a cross between “The Maltese Falcon and Clerks” so that’s not such a bad tease. Shot in Edinburgh, it’s a good natured piece full of familiar surroundings including Deadhead Comics where a lot of it takes place. Spotted (Tall) Paul Robinson of The Go Go as one of the shop customers.

The cast includes Derek Dick (aka Fish) – onetime Marillion front man looking a lot like my good friend Lou Whitney of Springfield, Mo. and a female lead that reminded me of Laura Cantrell. It’s a kind of Bill Forsyth take on Kevin Smith. If ever there’s a live action Desperate Dan flick then this DD is a shoe-in. The director and writer both confessed to be fans of the Genesis tribute band that Fish once fronted. Their man couldn’t attend because he was in Poland.

Setting out on a small tour of Scottish picture palaces, the film had its UK debut at the Glasgow Film Festival a week or so ago. It’s really quite charming and possibly exotic to folks watching it overseas. The makers notion that it could actually take place anywhere but it just happens to be Auld Reekie is a fairly wise one but the city has rarely looked so good at the pictures.

"Electric Man" is worth a watch. It does a lot with a little and should resonate with anyone who ever took comic book collecting seriously. It holds together pretty well as a yarn too. Check their website for information on where it might show up.
Posted by Lindsay Hutton at 4:02 PM No comments:

Posted by Lindsay Hutton at 3:22 PM No comments:

I can just about remember when I updated this every day, sometimes several times. It would be very nice to report that the reason for not doing so was because I had found a life below the piles of stuff that are accumulating around me but it simply isn’t so. Dealing with what has to be done when someone pegs it is one thing but doing that in tandem with the ailing health of another parent is simply something we didn’t bargain for. There’s all that to consider whilst everything else goes on.

The urge to just hibernate and come out on the other end having found it was all just a rather unpleasant dream is strong but I have a feeling that it’s not. Tis the bitter chill of reality that bites when you get to my age or “our” age if your folks are exceeding in years and are still around.

Saw First Aid Kit on Monday. Really didn’t feel like going anyplace but they’re really good and a definitive exercise in the pacing of a set/live dynamic. The offset of the percussion/drums really adds an extra dimension and those three can redefine power trio in both a quiet and loud sense. The off mic “Ghost Town” (still their best song in my opinion) was really something. The opener, Samantha Crane, didn’t outstay her welcome and joined FAK onstage for the encore. It was a really good show and I never even mention the Redd Kross style hair tossing here and there.

Today, I might get something done. It’s early though and there’s always a frisson of hope before it all goes splat.