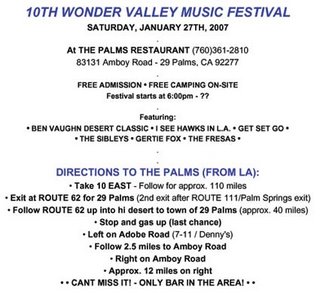 Posted by Lindsay Hutton at 7:18 PM No comments:
Sitting here catching up on e-mail listening to The Sabrejets session on Radio Ulster’s Across The Lines. Just heard a track from the new Lucinda Williams album “West” and it’s really great. Sounds like it’s live or something and furthermore rankles me that I didn’t go to the Barras. Then they follow it up with a Jesse Malin track “Lucinda” which confuses me because I’ve resisted Malin’s solo work. Mainly because of the involvement of that twonk Ry*n Ad*ms. I actively dislike RA. There’s something totally disingenuous about his shtick. My good mate, the Rigrocker, always said that I oughtta give Jesse a break. After all, I was a D-Generation fan but Adams didn’t taint them. Anyway the gist is that this “Lucinda” cut is really very good so I’m gonna take a tip from Mr Tepper and check out the new long-player, I’ve no idea if the aforementioned bugbear is involved but by the sound of this he isn’t. This show complete with Sabrejets session songs (including the rockabillified "Blitzkrieg Bop") is available on the BBC listen again feature for a week from last night (Friday). Now they're playing the Tom Morton-tipped Hold Steady who will be in Glasgow at The Cathouse on Valentines Day (February 14th)... check out Tom's new "Bobland" song on his myspace... distracted? Who me??
Posted by Lindsay Hutton at 3:25 PM No comments:
RIP - RK Sloane

(Thanks to Stefan for drawing my attention to that. Never had a clue that he passed away in October)

Been having ongoing technical problems and other bullshit to contend with. Something resembling normal service is always a possibility but in no way certain.
Posted by Lindsay Hutton at 2:22 PM No comments:
Newer Posts Older Posts Home
Subscribe to: Posts (Atom)

PDFs of all print issues can be accessed below. The 3 page pilot, “0” from September 1976 (Eddie and the Hot Rods drawing on the cover) never survived (at least I don't have one). There were only 10 as I recall.
Rockin’ Bones is here too. 1 - 7 are the newsletter/zines from before the club was closed down. I tried to keep things going and opened it up to the emerging garage/rock n' roll explosion. No. 8 included The Nomads and Scientists. I didn't care to encourage the goth/psychobilly circus and this fizzled out after 12 issues. The LOTC was always about the fans, it's short lifespan (1980 - 1983) generated a lifetime of good faith.
Source material quality wasn't always good and not having access to an A3 scanner anymore didn't help the outcome. Much of the content is embarrassing (to me) but 'tis all part of the journey so you be the judge, jury and/or executioner.
Just before things went awry in the '20, I started a tip sheet.
Numero 1
Numero 2
Numero 3
Numero 4
Numero 5
KNBT is an occasional attempt at rounding up a bunch of songs that might accompany whatever you're up to.
KNBT Episode 1
KNBT Episode 2
KNBT Episode 3
KNBT Episode 4
KNBT Episode 5
KNBT Episode 6
KNBT Episode 7
Muchas gracias to Simon Birrell for his assistance and patience with getting all this on here.
e-mail: lhnbt(at)hotmail(dot)com