What about that Gogs Broon? Displaying those famous people skills of his to deliver yet another blow to his party campaign. Not that it makes any real difference because as of midnight a week from today, we’re up the proverbial creek with no sign of paddles being delivered anytime soon. It would be high comedy if it wasn’t so serious in the run up to austerity plus.

Tonight’s final televised debate will be a sad state of affairs (always good to get an Amy Allison song title in) but I guess I’ll tune in for a while just to see how low they can go. It conflicts with "The Daily Show" and possibly the three episodes of "Treme" I have to watch. So much procrastination, so little time.

Saturday is the last day of trading for the institution that is Stand Out and Minus Zero Records on Blenheim Crescent in London. The end of another era. Mr Allerton and Mr Forsyth, the proprietors or this retail equivalent of a split single are presumably no longer able to sustain a business in this climate. Since trading went on to the interweb, things just haven’t been rosy for anyone who runs a proper record store. I imagine that they’ll trade individually in that sense themselves from here on in but I’ve been unable to establish exactly what the plans are.

Both Bills were huge supporters of this NBT malarkey back when it was in print form. I’d like to thank them for that indulgence and to wish them well in whatever they turn their hands to after the keys turn in the door this coming weekend. It’s a strange feeling to consider that the place was a huge player in the garage rock arena which included The Stooges when mostly nobody gave a shit. It’s a funny old world richt enough and not a fair one by any stretch.

In this airt, The Primevals will perform their short but snappy “Cramps” set at the SPOOKS show listed below.
Posted by Lindsay Hutton at 6:51 PM No comments: 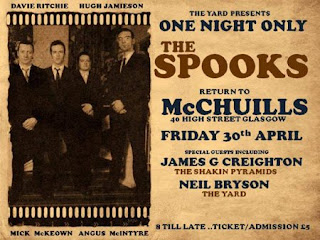 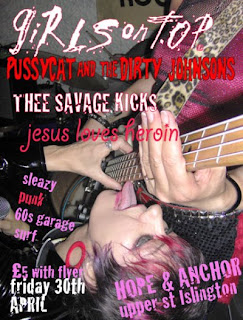