What's up? What's up? is the question that's constantly turnin' up in my virtual mailbox. Well, truth be told; nothin' really... It's just that the usual day-to-day seems to take up 99% of my time, and in the 1% left I actually prefer enjoyin' stuff rather than writin' about it. Capisce?

But right now I've got some spare minutes to tell you all 'bout what I've been diggin' as off late. A bottle of Norton Cabernet Sauvignon is sittin' half empty to the right of me, and a stack-o'-wax is on my left... 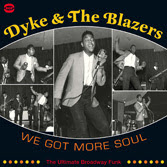 Dyke & the Blazers' We Got More Soul 2 CD/LP set (B.G.P.) is an amazing collection of 60s party music that sorta crosses the bridge 'tween soul 'n funk. Compiled 'n annotated by Alac Palao, so you know you're in for a quality package... Only slightly more "current" is Rough Trade Shops: 1976 a fine selection of (just) pre-punk goodies, includin' obvious offenders like the Ramones, Nick Lowe and Blondie, but also some fine reggae and long lost D.I.Y. goodies by the likes of the Slickee Boys and Radio Birdman. 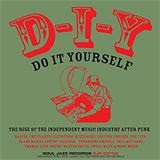 Speakin' of D.I.Y., Soul Jazz has just put out an album documenting the early days of just that. A pretty solid selection (Swell Maps, Kleenex!) coupled with a very informative booklet that spills the beans on Porky Prime cuts, Delga Press and the Pathway Studio... From the same label comes the excellent Studio One Rub-A-Dub, probably the finest reggae comp they've put out in ages, and one that's sure to even lift the spirit of non-smokers... From B.G.P. Comes the ace 1987 comp by the James Taylor Quartet. Fine, fine instros that'll take you back to the Flamingo in '65. Post Prisoners 'n somewhat mod-ish, this stuff is way beyond such categorisations tho'... Finally there's the Peel Sessions CD by pub rock legends Ducks Deluxe. From the very early (and very primitive) takes on Fireball and Coast To Coast to the later good'uns like Amsterdam Dog and Something's Going On, this gets both thumbs up from this end of the bar... Over 'n out...
Posted by Jeroen Vedder at 10:17 PM No comments:
Newer Posts Older Posts Home
Subscribe to: Posts (Atom)