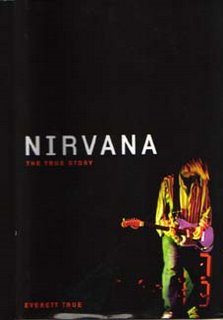 The title is a tad misleading (Seattle pun intended), being that the blast zone is far wider than just the Pacific Northwest’s (arguably) most famous export. It’s kind of told in a “Please Kill Me” format without being like that at all because it’s bonded by a commentary which connects the individual reflections and quotes. This gives the angles a dimension that just stringing together a bunch of statements could never relate. It features many peripheral players in the rise of the last big rock movement before the music industry started to implode.

It has Girl Trouble, The Fastbacks and a ton more. Reminded me of seeing Mudhoney’s first ever European show in Berlin, what was that - 1988? A few minds were blown that night I can tell you. I was never terribly interested in Nirvana as a band. There was a little too much roll missing from their ouvre but I saw a documentary about the making of Nevermind recently that kinda made me re-think my position. A wee bit. Anyway Mr True has been awarded the albatross of having globalised the thing called “grunge”. And he was never one to let the whole truth get in the way of a good yarn. "The True Story" is the best tackle of the subject since Gina Arnold’s Route 666 by a good country mile. When all is said, and the last brickbat has been jettisoned Mr Thackray is a believer. I know he has his detractors but for his sins he was in the front like when something that approximated “Punk” broke in the USA.

As you know, that particular country is made up of States that are bigger than UK. It’s a vast place and Nirvana rose at a time when the charts there were in a period of flux. Sort of like they are here with the advent of downloads. For a brief period, it was possible for a band to break through into the mainstream. Even something relatively underground. I recall Allan Campbell telling me that he called Geffen asking them about Nirvana and their press office didn’t even know that they had a band by that name. But anyway, “A True Story” is a exhaustive fly through by someone who was there and who soaked up more than he’d possibly care to admit. His proximity to the main character might alarm him but it’s not his fault that he was too close to the flame. In some ways it’s better that he was because his love of music protected him from being swamped by it. Some distance has now passed between him and those days in the trenches. Post traumatic rock stress disorder notwithstanding, this can be enjoyed whether you gave a hoot about Kurt Cobain or not.

You see, it was never just about him. Or the fact he killed himself. Or did he? The geography of the place Nirvana came from had as much to do with what they became as anything. For my money, Girl Trouble was the best band to come from that neck. I love that band and one of the best nights I ever spent was in their company at The Crocodile Café when I discovered that Bill "The Big Kahuna" Henderson and I shared an admiration of Sigue Sigue Sputnik while some totally shite hype called The Frogs was plying it’s questionable trade in the next room. At the height of the Nirvana boom, a TV show called Twin Peaks was quietly devouring people in their front rooms. I did and still do love the smell of them douglas firs in the morning… and look forward to snagging Part 2 on dvd this coming April so I can play the Heather Graham "Chickadee on a Dodge Dart" sequence over and over... but where was I.

But as it was the band seemed to conquer the world and Nirvana had a huge Scottish connection. Fast Forward via Stephen Pastel’s connection with Calvin Johnson of K, distributed “Love Buzz” in the UK. Kurt was a huge fan of The Vaselines amongst other Scots pop ensembles and wore a Captain America T-shirt on the cover of NME. Their tour manager Alex MacLeod was a former member of The Legion of The Cramped and Big John (Duncan) formerly of The Exploited was their guitar tech.

So anyway, it’s a massive tome and I took a while with it because I kept going back over things, surely a sign of a worthwhile work. No sign of the Young Fresh Fellows in there but Eddie and the Hot Rods make the cut, that puzzled me a bit but then again what the hell do I know. Susie Tennant is and that can only be a good thing. “The Aftermath” chapter is pretty poignant for me. Offering that it was pretty much about making a bunch of sub-standard bands and Courtney (Love) rich. Making it possible for them to have careers. I don't think that's Nirvana's fault per se, there's always an element of free-loading for the limited time that a particulardoor is "stuck" open.

I wonder what would have happened if Kurt was still around? I’m not sure if it’s possible to be as big as they were on the cusp of becoming anymore. Hell, look how “famous” The Ramones are here in 2007. And not one of the main protagonists around to see, far lest cash in on the situation. He’d probably be seeing ever-diminishing returns like everybody else. It’s an interesting conundrum to be sure and whatever was responsible for his exit, that was an end to it all. At least in tangible terms.

Everett True heads up the renegades at Plan B these days. A magazine devoted to a canvas of pop that’s almost and deep and wide as the Pacific Northwest itself. You might not always agree with him but he’s providing a service unsullied by the cut and paste culture that pervades what passes for “music journalism” these days.

Nirvana – The True Story is published by Omnibus Press. You can get it from Amazon or wherever. You can also go and pick it off the shelf and read random chapters if your local bookshop allows such a practice.
Posted by Lindsay Hutton at 5:43 PM 3 comments:
Newer Posts Older Posts Home
Subscribe to: Posts (Atom)