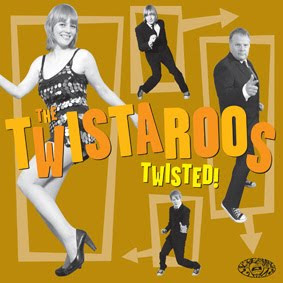 OK! Let's set the record straight. It's the YUM YUMS which become THE TWISTAROOS when they're getting a little tired of doing that good old bubblegum/power-pop thing, starting to play soulful rhythm'n'blues and rock'n'roll, kinda like the DETROIT COBRAS and the FLESHTONES, so you know that you need to have this record anyway!!!

THE TWISTAROOS was conceived one late night at Sin City, a bar in one of the more shady areas of Moss, Norway. The atmosphere was irresponsibly high whipped up by way too many cocktails. The primitive, seductive rythms of garage rock, soul and rocknroll had long ago turned the dance floor to a vipers nest of transpiration exchanging sinners, and it was then the slender singer Ms Goodvibe sporting an outrageously short hemline and an advanced intoxication wiggled up against the no less animated guitar player Morty Mortaroo for the occation impeccably dressed in shirt tails ever so wild and with a multi colored lamp shade on his head.

Lets start a dance band, she said, licking her blood red lips. You know, not disco or anything, but the dirty kind that makes things move down below! She looked hopefully into his eyes while finishing yet another double Sin City Cocktail Delight. Seconds earlier Mortaroo had ruled the dance floor, juggling a myriad of young beauties, and it didnt take long before the immortal sounds of Louie Louie appeared in his head: Dadada-Dada-Dadada-Dada Yupp, he knew exactly what she was talking about, so he pushed the lamp shade back with an affirmative blink of the eye: Dance band - you got it! No sooner said than done Otto Gamstaroo, a well known to the music police in Moss, was brought on board as drummer. Der Gamster is a guy who treats his drums as he treats the men who gets in his way, he beats the hell out of them with a Bo Diddley beat. I brought a bass player, Otto said when the band was to make their debut show. He pointed towards a shady-looking gentleman at the end of the bar, already halfway through a stiff drink. This was not to be the last time Otto brought along a friend from the rhythm section circle in town. It was easier that way.

They came, did their job, got paid and left. No names no conversation. THE TWISTAROOS will do anything for money. They play weddings, birthdays, funerals, births. All kinds of parties! So book them now; they have expensive habits and need the cash!

CD available on House of Rock but did you read that? This is VINYL!!
Posted by Lindsay Hutton at 9:27 AM No comments:
Newer Posts Older Posts Home
Subscribe to: Posts (Atom)