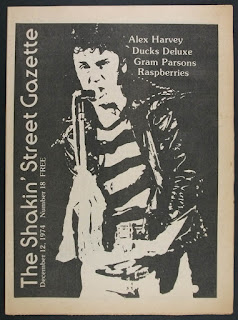 I heard today via my friend David Wolin that another old co-conspirator has left the crease.

Does the name Gary Sperrazza! (with exclamation mark) ring any bells? He latterly ran a store called Apollo Records in Buffalo, NY and quite possibly continued to sell records after it closed. We started off as pen/type-pals when he wrote for Bomp! and established a friendship over the years. His zine, The Shakin Street Gazette was a magazine that covered great music before pigeonholes ruined things. If I remember correctly, and this is a big thing – he was the one that introduced me to what was going on down Springfield way in Missouri as well as a host of other things. He was a huge soul fan and I discovered all manner of gems through Gary.

I may never have hooked up with Lou and co if it hadn't been for this guy.

Sperrazza! was a character and on paper he seemed like a very decent geezer. I went to his home town of Buffalo to meet him during my first trip to the USA with my then wife Gail. Big mistake. That was the end right there because we were treated pretty shabbily. It was the rudeness more than anything else. However, I learned a valuable lesson out of that experience. I learned that if someone takes time to meet with you then one should give him, her or them full attention. To always go that extra mile to make sure they had a good time. It was sad because I really hate to lose friends for whatever reason.

There was a positive outcome however, because after that 36 or 48 hours of relative hell (it was good to see David who really was a youngster back then when he was in The Splatcats), Gail and I hopped on the bus to Rochester and hooked up with my lifelong pals Kevin and Corinne Patrick. That was when I also met the Rt. Hon. Greg Prevost at the fabled House of Guitars too.

So all was well that ended well.

Gary was a complicated person and according to reports not always that easy to get along with. One comes to learn that people are people and sometimes they have a reason for acting the way they do. I don't know whether he did or not but I plan to unearth some of the cassette tapes he sent me this weekend and will endeavour to remember him the way I thought he was before we met.


My condolences to any friends and family that might stumble upon this. I don’t know if he had any but I know that you can read some of his writing on Rock’s Backpages.
Posted by Lindsay Hutton at 6:21 PM 28 comments:
Newer Posts Older Posts Home
Subscribe to: Posts (Atom)