RIP - Nancy Overton (The Chordettes)
Posted by Lindsay Hutton at 3:01 PM No comments: 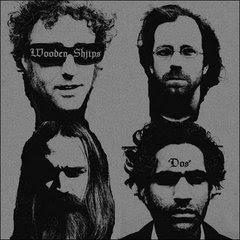 Forget the special RSD releases of retread Stooges/MC5 and whatever, the big item of the day has to be Wooden Shjips "Dos" complete with mix cd compiled by the band. The roots of the Shjips are definitely showing on this limited edition. Vinyl is two weeks away but from what I could see, this was doing brisk business meantime. Not sure if the comp cd will be accompanying that. Probably not.

Anyway, I think that the leaking of this particular release didn't result in sinking sales. Anybody who heard it was babbling uncontrollably about how damn great it is. Track 5, "Fallin'" is quite simply the most hypnotic groove that I've come across in many moons.

Not much info on the packaging. Once again it's the music itself that's doing the talking. If you're in the market for some space rock with a bite then this is your "man" - man. And I use that term as a greeting to all and every gender. Peace? That's a different story, this is anything but peaceful but the perfect Neu/Suicide melding with a "dusting" (yo Tarq!) of Iron Butterfly, has kind of blown my napper innards. (S)h(j)ips don't lie...

I don't completely agree with this review but infowise it has a neat tempo.

"Muchas garcias" to for Dr H who made it possible to hear this several weeks ago.
Posted by Lindsay Hutton at 12:58 PM No comments:

This has been posted elsewhere I know but Russell and I were talking about it yesterday and decreed that it rules!

Posted by Lindsay Hutton at 12:36 PM 8 comments:
Another day, another ISP hassle. No blueyonder this morning but waht's the point of getting agitated. Plenty time for that later as the realisation of burning a weeks holiday kicks in.

Record Store Day was a hit in terms of the social aspect. I'll reserve my more cynical take on it all because even although every day is RSD for some people, it did stir up some very good vibes. I particularly applaud the "home baking" aspect and Katrina Pastel in particular for the scrumdiddleyumptious cheese sticks! I saw a couple of guys from a new signing - The Virgins - at Avalanche. Do the kids really want a new Doobie Brothers? Probably not.

The big story of the day though had nothing to do with RSD really. It involved the Boyle phenomenon that is seemingly sweeping the earth. True story, you couldn't make it up. A whole lot of you guys are familiar with the Rt Hon. Stewart Cruickshank, and you know his standing in the community not only locally but globally. So 10 years ago, the intrepid and selfless Captain Krunch finds himself in Whitburn Town Hall (look it up) judging a talent show. That was the self-same competition that resulted in this "Cry Me A River" track that's turned up. So there you go - the one and only Stewart Cruickshank gazumped Cowell by several light years.

The situation this woman finds herself in will hopefully provide her with the wherewithall to want for nothing anymore. the way her business has been dragged through te neighbourhood, she deserves it. Don't give me that crap about her sounding like Peggy Lee - she sounds like Lena Martell and I guess that she's taking one day at a time right about now. And it's true, she doesn't look anything like Julie London but as Jaki McDougall rightly pointed out, that's what wee wifie's from that part of the world look like.

Irrespective of the freakshow aspect, there's a John Waters factor here. Ultimately it doesn't matter what her background. Whitburn has been twinned with Baltimore by the sickness of this trumped up version of The Gong Show.

The Sexual Objects played as a duo at Mono and the Tyrannosaurus Rex vs Alex Harvey boded well for a full on electric assault. Would love to have stayed for Peter Parker, soundcheck was great but it had been a long, very cool shift. It's not often that you bump into a guy who's a mate of the great Roger Armstrong that you can reminisce about "Rock On" with.

At this point, I'm pondering whether to go to The Supersuckers/Nashville Pussy show. Not sure.

Elsewhere in Glasgow - Camera Obscura have an album launch in Mono tonight. They're not playing but the considerable djing skills of Traceyanne Campbell and Carey lander will be on display.
Posted by Lindsay Hutton at 8:14 AM No comments:
Newer Posts Older Posts Home
Subscribe to: Posts (Atom)