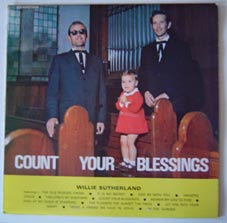 "Everybody I know has a big but..." sez PeeWee Herman in Pee Wee's Big Adventure. Saw that tonight for the first time in years. And he's right. But anyway, everybody has to make their way. They may also have "to pay and pay". Hustle(s) notwithstanding. I have a deep seated foreboding gnawing at my will to exist this past couple of days. In complete and utter contrast to the positive place that I found myself last Saturday night. Here's what I think could be one of the most disturbing album covers of all time. Courtesy of Captain Crunch who spied it in the Byres Road Oxfam shop and gifted it to me. When I worked in Orbit Records, here in the early to mid-70's we used to sell bings of this. The "Night Of The Hunter" vibe of the sleeve didn't click back then but it'd probably be banned outright now. I don't think it's been reproduced in any of these dodgy album cover books but it must be a candidate. Today has been a bust. Chores and general bollocks have decreed that any sort of attempt at blogging has been foiled. Had a few enquiries as to "reviewing stuff" and the criteria remains. I do get sent stuff and if I think our readers will dig it or whatever then I'll write about it. As I'm sure will the other guys. If I think something is guff then I won't. It's not difficult (I don't think) to get a beat on what we like around here and what we don't. This thing exists for information purposes. To direct people to stuff that might just make the schlepp that teeny bit more bearable. End of sermon.
Posted by Lindsay Hutton at 8:46 PM No comments:

THE VIDEO BEAT (link courtesy of Steve Hesske)
Posted by Lindsay Hutton at 11:34 AM No comments: