Radio Birdman new album, plus Euro and US tours.(link c/o Sander Bink)
Posted by Jeroen Vedder at 11:08 PM No comments: 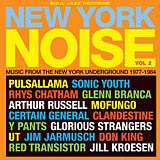 Various - New York Noise vol.2, Various - Big Apple Rappin' (both Soul Jazz).
Two sides of NYC's musical spectrum circa 1980. The Noise disc documents the city's post-punk/no wave scenes, not all of it up to the standards of Mars or Von Lmo, but a solid document of it's time anyways. The noisiest parts come c/o Red Transistor (from their Ecstatic Peace 7"), Rhys Chatham and the Static (w/ Glenn Branca), but there's also plenty of room for the more percussive and jazzy end of things. Suffice to say that this, and it's preceding volume, fit neatly next to the age-old No New York album on the shelves here at HQ. Not sure that rap (in any format) goes down too well w/ you NBT readers, but as for me, I've always enjoyed the pre-crack/pre-gangsta world of hip-hop. A world that radiated a sense of fun and/or innocence not unlike late 60s funk or even frat-rock in it's earliest incarnation. No foul mouthed over-aggressive garbage here, think Sugar Hill Gang if you need some point of reference, and no greatest hits either, I was only familiar w/ Spoonie Gee's Spoonin' Rap (his first), and the rest of it is new to me even this far down the line. Packaged with all the style and info we've come to expect from Soul Jazz, these are both well worth the bother of checking out...
Posted by Jeroen Vedder at 10:31 PM No comments:
Just clocked the Vitara ad that uses Joey's "arrangement" of "(What A) Wonderful World" but not his track. Which makes it something less than wonderful. But - you're right - why would one expect any different? Par for the (insert expletive of choice here) course.
Posted by Lindsay Hutton at 8:18 PM No comments: 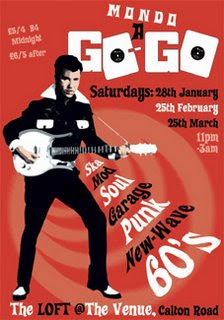 Guest DJ ANDREW TULLY (Avalanche Records, Edinburgh) - A dab hand at buying and selling old records, but now Andrew is dusting off some Mod, Punk, 60's and New-Wave faves from his own shelves to spin this Saturday night. Some of our older patrons may also remember Mr Tully from his days as a member of cult Edinburgh band, Jesse Garon And The Desperadoes - who came out of retirement to support Slade.. sorry SUEDE! last time they played live in the Capital.

Residents Tall Paul Robinson and Angus will also be there to play;
60's, Mod, Garage, Soul, Punk, New Wave, Surf, Psychedelia and Ska."
Posted by Lindsay Hutton at 7:50 PM 2 comments:
Hope you "beasties" can score some of the good haggis (meat or veggie, depending on your persuasion) and a decent dram this Rabbie Burns Day. Accept nae substitute.
Posted by Lindsay Hutton at 6:02 AM No comments:
Newer Posts Older Posts Home
Subscribe to: Posts (Atom)