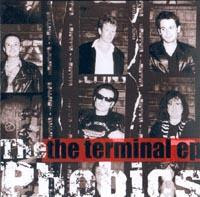 A missive from Mr Tom Phobic...
"Hi Kids,
It's that time again....summer has packed it's bags and buggered off somewhere else, it's getting darker earlier, the kids are back at school (or not, according to figures) petrol keeps going up, politicians keep lying and killing and not giving a toss......dontitmakeyafeelsick?
.......afraid we can't offer a cure (or a final solution) but why not forget about your troubles for one night and drag your hides out to our spiritual (and i don't just mean liquor)home in Deptford for an evening of primo guitar slinging punk rock slop served just the way you like it!
As ever, it's FREE and we'll be playing stuff from our "Down and Out In Deptford EP" which is picking up rave reviews here, in Europe, over in the States and OZ, and EVEN in Argentina where we are radio stars! (yeah, we know - most of us have a face for radio!)
Anyway, enough ramble, here's the skinny -

Anyone need directions, more info, whatever drop me a line. Tom"
Posted by Lindsay Hutton at 2:42 PM No comments:
A year ago, this very “noo”, I was attending the Punk Kongress in Kassel. Tis presactly 365 days since I saw CZD and The Boonaraaas in the Lolita Bar in that cool German town. Hopefully there’ll be some news on the next one soon…

Ms Laura Cantrell is back in the ‘hood and has a show at Edinburgh’s Queens Hall tonight. We caught up with her and Mr Jeremy Chatzky for a pleasant evening in Glasgow along with Sir Francis of Macdonald. Always great to catch up but Ms C had some bad news to lay on us. There’s no way to gild this so I’ll come straight out with it.

WFMU is taking The Radio Thrift Shop off the air. For reasons best known to the programmers of the NJ station, they’ve decided to remove the RTS from the upcoming Fall schedule. If you’ve got a mo’, maybe you could drop them a line and ask what they expect to gain from this plainly daft action. All good things and everything taken into account, this is an open and shut case of them not knowing what they’ve got ‘til it’s gone. I think the last show is on October 10th but I’ll get back to you on that. I think The proprietress is disappointed and maybe bloodied but absolutely unbowed. She’ll take the format to another station mayhap? One that understands the meaning of community in the terms that I always thought the WFMU did. I’m sure there are politics involved but that means less than F all to we - the listeners, it's more like a betrayal, in my er, humble opinion. A worthy programme, Rex's Fools Paradise will be brought forward into the RTS slot but that's not the point. Not having Laura on their roster isn't the sharpest decision that's been taken in Jersey City methinks.

Mr Chatzky, who plays with Ronnie Spector also, tells we that the new album by the lady is due for release soon and it contains her version of Amy Rigby’s oughtta be smash, “All I Want”. Things appear to be shaping up nicely for Ms Rigby who will hopefully be packing a band on her upcoming UK jaunt. More about that as the info becomes available.

On a loose Teenage Fanclub related point and having been out on the town last night, I set the VCR for “The Status Quo” appearing on Coronation Street. Absolutely brilliant stuff which reminds me of how great TV can be but seldom is. A national institution appearing on another national institution. Not quite at the lofty heights of Uncle Junior watching Larry David but pretty darn groovy nonetheless. It made me think about the time that "The Quo" were playing The Fillmore during a vacation in San Francisco and we didn’t go. Of course they haven’t made a decent record in forever but that’s not the point. I saw them many times in their heyday. They always had great support acts too, like Montrose and Savoy Brown to name but two. The memories are flooding back of late, I remember more about thirty years ago than I do about the past month.

Anyway, I’m heading for Edinburgh now. If you’re anywhere about these parts then you should consider a jaunt there also. There are tickets for the Laura gig to be had at the door… treat yourself.
Posted by Lindsay Hutton at 1:36 PM 2 comments:
Newer Posts Older Posts Home
Subscribe to: Posts (Atom)