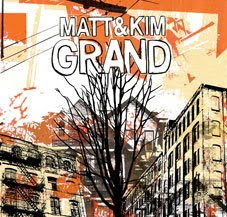 I’m not gonna be around this computer thing too much today but what better way to begin a new set of numbers than with something of an exclusive to sandblast those cobwebs away.

Named after the instro-stramash that is track 7 on their debut or the street in Brooklyn? I’m not entirely sure but “Grand”, the second M&K opus is upon us on January 20th , courtesy of Fader Label.

There’s a belief that an act should appeal to an audience that is 10 to 12 years younger than they are. Young ‘uns give the illusion that they're more sophisticated these days so it may no longer apply. Although that may not be the right word in these torrid torrent times, I guess the kids wouldn’t be down with the expression "spoiled". It used to take weeks or even months of serious effort to hear or get something this cool.

Matt & Kim retain that old time sense of mystery. Sure, you can hear them on your computer but they have the chops and the charisma to convince people that they want, nay need the product, to have and to own. They make music to believe in, not a commodity, for kids of all ages. Reflecting all that is great about the fleeting nature of all great things. Having been privileged to witness the phenom first hand, I have no qualms in telling you that Matt(hew) & Kim(berley) are the real deal.

A couple of true misfits (and I mean that in the coolest sense of the expression) engrossed in their art. The reason that they’re able to do this is that fundamentally, they create this stuff for themselves. They do their way and, if you’re prepared to go with, then you’ll have a very good time. A generosity of spirit exists within these songs. Then there’s the sound. And finally there’s the live experience. M&K aren’t choreographed and they don’t do encores, a one gal drum corps/one guy organ grinder that has stumbled upon a lethal formula not unlike The Ramones but not like them.

Experience these sensations individually or collectively but know this, what they achieve is way more in keeping with the spirit of real punk rock than the latest bunch of shouty oiks that are alleged to be of any consequence week. “Grand” contains a virus that I’d dearly love the world to catch. No antidote required.

Two songs, “Daylight” and “Good Ol’ Fashion Nightmare” can be found online if you look. Regular visitors to this portal may well be familiar with both by now. 11 songs in total clock in at just about the half hour mark. There’s no excess flab here. All wheat, no chaff is the order of the day. Even those with zip of an attention span won’t have time to get bored. “Lessons Learned” is a serious real contender to be the most ubiquitous song this year and each cut could well be a “single” as we old-timers used to call them.

Available as “files” and on cd and vinyl, there’s a version for every persuasion. If you have trouble remembering what fun sounds like then you need to make this pitstop. And when they stop by your neighbourhood then please, cut along and bask in the buck wildness.
Posted by Lindsay Hutton at 9:25 AM No comments:
Newer Posts Older Posts Home
Subscribe to: Posts (Atom)