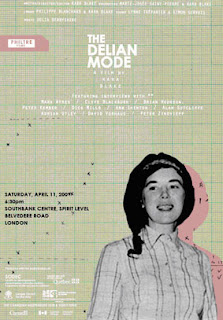 John Cavanagh has this info for you lucky folks in "the London"...
"I'm sending this to friends who either live in London or who might be interested in Delia Derbyshire. Quite clearly, I understand many of those I 'invite" won't be able to attend, but I hope you're interested to know of this new film. I supplied interview material I recorded with the late Delia Derbyshire and also recorded a bit of voiceover for the film.
Here's some info about the film: The Delian Mode explores the life and work of electronic music pioneer Delia Derbyshire, the woman behind the distinctive Doctor Who theme music created at the BBC Radiophonic Workshop in the early 1960's.
The film delves into Derbyshire’s unique approach to sound recording and manipulation while supporting a slowly growing recognition of her as an influential figure in the history of electronic music.
Participants include Brian Hodgson and Dick Mills of the now defunct BBC Radiophonic Workshop, the founder of Electronic Music Studios (EMS) Peter Zinovieff, musicians Peter Kember (Sonic Boom), Adrian Utley (Portishead), and Ann Shenton (Add N to X) as well as other friends and colleagues of Delia. Directed by Kara Blake/
Duration: 25 minutes
Yellow Room, Spirit Level, Southbank Centre - The film will be introduced by Peaches at 6.30 and will screen on a loop until 9. Admission is free.
Posted by Lindsay Hutton at 8:36 PM No comments:
I decided against the haircut. And the rain meant that I could procrastinate with regard to pulling weeds outta the drive. Some headway was made in filing away 45's but that's all come to a grinding halt because I've brought a pile of stuff down to play. So I can do that while I futz around on here. Perfect. At the moment, The Screaming Blue Messiahs are reverberating at some considerable volume. I was inspired by hearing them on NoFoSo this morning and I'm thinking that this combo should have been bigger than U2. Come to think of it, everybody should be bigger than them but you get my drift. And if you don't then you can suck on the proverbial dummy...

A major regret of mine was not being able to see through the publishing of JD King's "Like A 45 at 33" collection of short stories. Each and every one was solid gold and if there are any enterprising publishers out there looking for that commodity then you should cyberscamper over to his site to check out a brand new piece that he's posted there. Also, if there are any bands who are looking to have a boss jacket adorn some kind of physical release, then JD is yer man. His wares are there to be poured over after you've dug the wordage.

Ever wondered what punk rockers in Glenrothes get up to? Nip on over to Newtown Products to find out.

Oh, Side one of "Gunshy" (pronounced "Gun Shy") is just about done so it'll be kettle on and flip it over. Oh, and I need to scan that Larry Wallis "Police Car" sleeve. Telling you, it's all flippin' go...
Posted by Lindsay Hutton at 3:49 PM No comments:
Robbie Fulks has 50 new songs available for your downloading pleasure right here...

He's also headed for Sweden, details here. (Thanks to Ms Amy Allison for the nod on this one)
Posted by Lindsay Hutton at 10:14 AM No comments:
I was never on board the Josef K bus but I'm down with this cause...

Basic premise: Blogs being targetted randomly by ISP’s even for music where artists are happy about the extra coverage. The sites are essential promo tools for all artists.

Most artists express the view that as many people should be able to hear their music as possible by whatever means. The fan will then go to a concert or by back catalogue get the vinyl or even the new cd. The Internet is just like radio and mp3s are just clutter to be binned or bought in better quality format after sampling!!! Artists need loyal fans.

Paul Haig gave a free track "Reason" to The Vinyl Villain to give away in support of the blogger network.

If you a have great track, the best method of getting it heard is over the net – where word is spread by music fans - Hearing new music is based on recommendation, not by mass advertising budgets….unless you are U2, blogs/free music on the net is the only future…

"If you go stumbling around music blogs on the Internet on Monday 6th April, there's a reasonable chance you'll find someone saying good things about Paul Haig, arguably the greatest pop star to ever have come out of Edinburgh.

So far, some 25 bloggers have decided that next Monday should be designated 'Paul Haig Day' and will be featuring posts about the musician whose career goes back almost 30 years to the days when Postcard Records were The Sound of Young Scotland.

This sudden upsurge of interest in the former Josef K lead singer is no accident, and is the result of a number of music fans, not all of whom know much about Paul Haig, wanting to thank him for taking a stand and encouraging bloggers to keep on doing what they do.

Bloggers have come under increasing attack in recent times, thanks to many in the music industry using the draconian measures of the Digital Millenium Copyright Act (DMCA), an American piece of legislation signed by President Clinton in 1998 which insists that Internet Service Providers (ISPs) must remove material that appears to constitute copyright infringment.

So, if a music industry lawyer discovers a blogger has posted an mp3 of a song without permission, they can contact the ISP, claim they represent the individual or organisatin with the copyright and demand the offending material be removed. Fair enough you might say...

But, the law is such that anyone can use DMCA to demand a takedown without having to prove that they have ownership of the copyright, and the ISP have no option but to comply - it has even been proven that where musicians have expressly given support for their song to be highlighted on a blog, an anoymous DMCA request has seen the mp3 removed.

Such was the case last month when my blog, one that's been running since September 2006 and almost exclusively looks back to music of the 80s and 90s, featured "Blue For You", one of the early solo singles by Paul Haig. I'd been in touch with the singer who didn’t object at all to featuring the song and was given a few words by Paul to add to the story behind its recording in Edinburgh back in 1982.

Within 48 hours of publication, the piece was removed by the ISP, although no-one associated with the copyright had made such a request.

In response, Paul Haig immediately decided to make his 2007 single "Reason" available through TVV on the basis that music fans who downloaded the song and decided that they liked it were more than likely to subsequently purchase a copy. So far, after just more than a week, no-one has asked the ISP to remove the mp3....

"I was shocked when the DMCA was served on 'Blue For You' and I did think about closing down the blog altogether, wondering if the hours spent working on it were worth it. But the quick response from Paul and his mangement and the offer of a further song made me realise that there are some musicians out there who value what I and many thousands of others do every day. Blogging isn't about piracy or making music available for free - it's more to do with writing about artists we love in the hope that more people will become fans.

I get about 700 hits a day from all over the world and quite a number of readers got in touch to say how much they appreciated the support given by Paul. The idea of Paul Haig Day emerged from that.

The thing I find most pleasing about it is that up until all this DCMA nonsense, some people knew next to nothing about Paul Haig and don't have any of his records in their collections but they're still going to put some words together and post an mp3. It'll be interesting to see if any of us are served DCMA notices."

Blogs in Australia, Canada, Germany and America and across the UK are all taking part.

Details can be found at www.thevinylvillain.blogspot.com.

As a footnote to all this, I don't post mp3's because I prefer to direct visitors to the artists site. There's simply no time on my part to harvest tracks and post every day. We're lucky to have resources like The Vinyl Villain and So Many Records, So Little Time to name but two.

The old guard is on the ropes, mostly because of their own inability to recognise that this is a legitimate form of getting the word out. They confuse a desire to communicate with piracy and for that alone they need to get a rocket up the arse. Ouch is right.
Posted by Lindsay Hutton at 8:20 AM 1 comment:
Newer Posts Older Posts Home
Subscribe to: Posts (Atom)