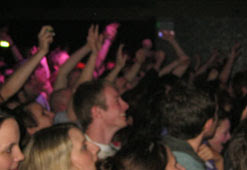 I have never felt older (give or take) than I did during the sets by the two opening bands in London on Wednesday evening. Regurgitating several decades of what has already been reconstituted to death, this was the musical equivalent of turkey twizzlers or whatever. One of the members of Cymbals looked like Chesney from Coronation Street from where I was standing. The poster said something about the other act being called Prehistoric Penguins, if it’s the same group and they changed their name then change it back. I know I could google to validate that but I already burned way too much time experiencing their, er, music.

Openers, Echoes – all the good names are already taken. We know this but come on, “you’re ‘avin’ a giraffe” as the ex-Eastender says on the ad, that often plays in the breaks between Corrie, the one with “Sinbad” in it. A soundtrack for the impending Royal Wedding that was so horrendously generic that it’s quite possibly headed for the stratosphere.

Last time I was in this venue it was February 1991 or thereabouts, when Dave Alvin and The Allnighters played. The evening before the first Gulf War broke out my memory serves me like one of those wheels on fire. Or maybe that should read misfires. 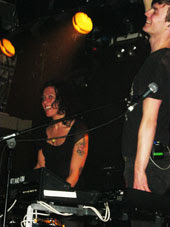 Nothing sells out anymore but this show did and it’s a testament to Matt and Kim’s unique thrash pop sensibilities that the place was packed to the rafters. This is without conventional support ala magazine hype and airplay on what passes for radio these days. It was perhaps the most rapturous response I’ve ever seen an act get down there. They even kick off with “Yea Yeah” these days so you’ll get some idea about the energy levels by close of play. Such boisterosity is only fitting for the wall to wall anthems and “Northeast” might slow things down a little but the way it builds is nothing short of stadium-mungous. “Sidewalks” finally gets a UK release next week but I’ll be damned if this audience wasn’t entirely conversant with the new material already. 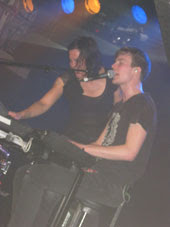 These positive vibrations are at odds with what is sanctioned by NME type quangos. This might mean that it takes a little longer to infiltrate an actual audience here in Blighty where people seem to depend on being spoon fed but the medicine will go down, I’m certain of that.

They were supposed to go see Screeching Weasel in Austin last Friday night and for one reason and another couldn’t go. Kim told me that she’d heard that Ben had hit someone and that the gig came to an end. And sure enough, when I got home there's all this stuff about what happened that has turned into a feeding frenzy. Not having been there, I’m not qualified to comment but I don’t recognise the Ben Weasel monster that’s being painted in cyberspace.

I did think about being flippant. That I might try to deflate it by chalking it up to equal opportunity but of course no-one can condone hitting women of either sex. Reading the “punk rock” commentary that follows the Jim DeRogatis report is pretty sickening but ultimately typical of how the cyber-bush telegraph works. Violence never got anybody anyplace and I’m sure that no-one regrets the situation more than Ben does at this point in time.

Don’t let any of this colour your enjoyment of “First World Manifesto” though, more about which later.
Posted by Lindsay Hutton at 4:58 PM No comments:
Newer Posts Older Posts Home
Subscribe to: Posts (Atom)