Dutch readers are advised to tune in to Nederland 3 this tuesday (20:25) for an edited version of the excellent End Of The Century Ramones documentary.
Posted by Jeroen Vedder at 10:59 PM No comments: 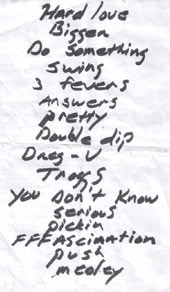 "Last night, The Fleshtones played in Évreux as part of their European 30th anniversary tour. Opening act was The Neurotic Swingers, a French combo who seem to have success elsewhere, like in Japan and Spain. Maybe for us Frenchies, they sound too much like The Dogs – that's The (French) Dogs, who released “19”, the best 1977 punk song ever (no, it’s not the Users “Sick Of You” and if you don’t agree, well, you're wrong). By the way, The Swingers covered “19” at the end of their set. Another connection with The Dogs is that the Fleshtones latest record is a 10” titled “Allo Brooklyn, Ici montmartre”, sung in French by Tony Truant & the Fleshtones. Tony was a member of the Dogs Mk. 2, the line up that recorded “Too Much Class For The Neighbourhood”, an album for all Flamin’ Groovies fans circa “Shake Some Action”, “Now” and “Jumpin’ In The Night”.

The Fleshtones are older but are still like teenagers. Happy to be on stage and their enthusiasm is infectious. They are true entertainers and no one in the audience can stay static, Peter Zaremba and Keith Streng left the stage often to bait the crowd. During “Push Up Man”, 3 guys were enrolled to play and sing while the band were doing their exercises. I declined the invitation because I was recording the show which ended with a long encore that featured many old favourites including “Girl From Baltimore"
Posted by Lindsay Hutton at 7:07 PM 1 comment: 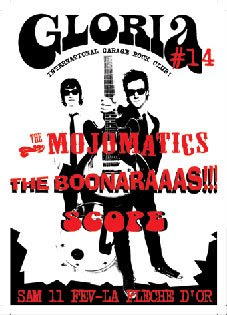 If anybody out there reading this is in Paris then cut along to see THE BOONARAAAS at Gloria Club tonight. I know I would if I could.
Posted by Lindsay Hutton at 2:59 PM No comments: 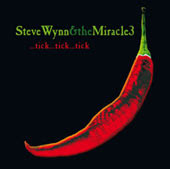 That lone Warholian chili on the cover of Steve Wynn and the Miracle 3’s “… tick… tick… tick” looks unassuming enough but signifies the afterburn of the material it’s composed of. Pleasing to hear a proper set of songs clocking in at a cool duration and sequenced like a good old-fashioned slab of vinyl. Some nice dustbowl Velvets type panorama nestling up along with primo garage pop. “Wild Mercury” and “Cindy, It Was Always You” are particularly arresting. This is more scotch bonnet than habanero if you know your peppers but like a good bowl this won’t burn you. Savour the flavours that are in here and you’ll be making an acquaintance that’ll be taking up quite a slice of your time. 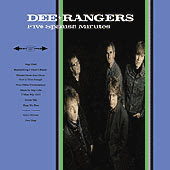 "...tick" is almost Scandanavian in places and talking of which, "Five Spanish Minutes" is the most recent Dee-Rangers release on Screaming Apple. I think Steve may have mentioned it already but here’s my tuppence worth on the swingathon it manifests. The authentic sixties-sounding swirl is tempered with that mod(ern) sounding gusto that the Swedes have down pat. “Easy to See” could be The Fleshtones so you know that’s (the right side of) a good thing. The proper way to catch this would be to watch ‘em bangin’ it out from a club stage but 5SM is a groovy estimation to re-create that live scene in your own living room. 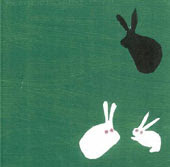 The Magik Markers are set to play the Yeah Yeah Yeahs curated day at the upcoming All Tomorrows Parties weekender. “A Panegyric To The Things I Do Not Understand” is the latest Gulcher release to fall through the letterbox here and their unothodox clatter is a hit and miss affair but when it does sashay into some kind of disjoined groove it recalls the free-form freakootery of stoner noise sometimes frequented by Magic Dirt. One of these two “compositions” would appear to have been recorded in Paris. 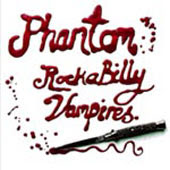 Phantom weigh in with “Rock‘a’billy Vampires” but there’s no actual ‘billy on it. More like Fatboy Slim on a b-movie bender to snag a snake oil soundtrack to some schlock flick he found sealed in a capsule. Wee bit of Badalamenti here, shot of radium and blues there and a stab at Jody Reynolds “Fire Of Love”. Saucerman’s latest escapade is at odds with what passes for owt that might be standing in a line expecting 15 seconds of fame to slap it in the kisser. A peculiar concoction that conjures up a Rev/Vega vignette as it twists and turns to ultimately end in a John Carpenteresque shimmy. Still, not a glimmer of anything approximating that gear you associate with big hair and the prerequisite gel.
Posted by Lindsay Hutton at 2:31 PM No comments:
Newer Posts Older Posts Home
Subscribe to: Posts (Atom)