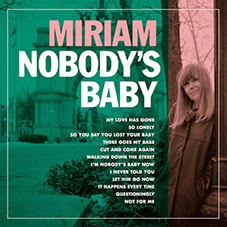 I’m not really one for year-end round ups. Generally I’m glad to see the back of any old year but there have been some fine times had over the course of this one. Those responsible know who they are (I hope) and I banish all evil considerations agin those who I expected to act with a little more decorum. They presumably know who they are too. Whether they give a hoot or not is not this guy's concern at this point. Disappointment is second nature around these parts particularly during the festering season. 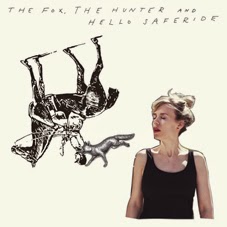 So let’s turn to the subject of music and the outright, never failing to shimmer debut by the first lady of Norton, MIRIAM (Linna). "Nobody’s Baby". Less than a year after hearing the single in the confines of their HQ, a whole album and even shows came to pass. An utter revelation from start to finish. The song selection, the performance and Sam Elwitt’s genius piecing together of the whole puzzle made for a truly uplifting release. Even although the subject matter largely dwells on the negative, I put it to you that if you don’t get very excited when listening to this then you clearly need assistance. I hope that these kids catch a break soon and that the performance aspect will be brought to this side of the “big watter” over the course of this coming year. 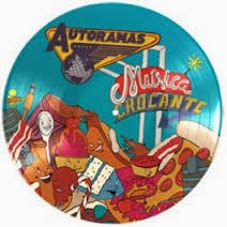 Someone that I will be seeing soon came back with "The Fox, The Hunter and Hello Saferide" in September. Annika Norlin never fails to deliver the very tops in pop. She takes all of this at her own pace and whether the world catches up with this exquisite music doesn’t seem to mither her. I hope that she might venture beyond Sweden again at some point but until then the mountain is all to happy to go to Mohammed (are you still allowed to say that?) I shall see her in Malmo at the end of February and very much look forward to that. 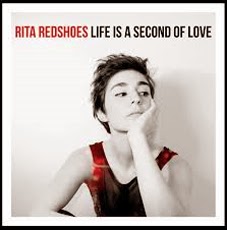 Best "new to me" combo was the Brazilian sensation known as Autoramas, they turned out to be far from the standard garage rock racket I might have expected.  You can listen to "Música Crocante" here and even watch their Funtastic antics also. After seeing them I was almost feart to listen to a recording but they’ve caught that off centre buzz buzz buzz on this latest recording just fine. 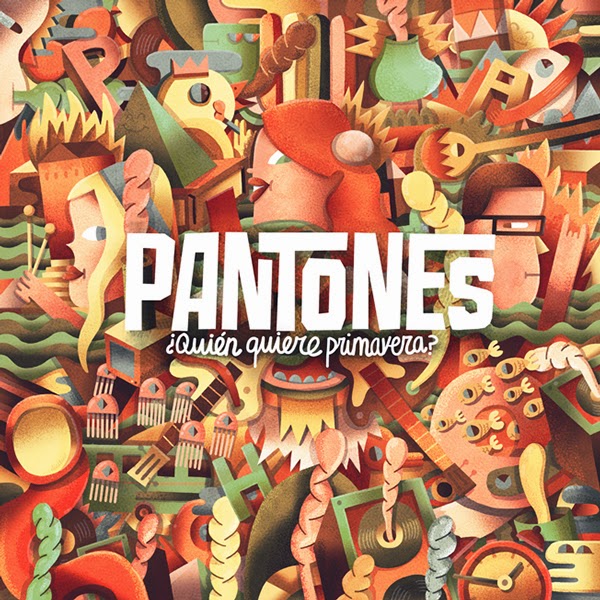 Keeping up the Portuguese twist, circumstances prevail that I never got around to putting anything up here about the latest Rita Redshoes album "Life Is A Second Of Love". Rightly lauded in her homeland, Rita's fare is just about as far away from what passes as the mainstream as it could be. That’s not to say that it’s not commercial. If you exposed the audiences of however many nights Kate Bush did in Hammersmith to this gal's oeuvre then I’m sure many would be smitten. But in some ways, that may be like expecting Eagles fans to like The Skeletons or NRBQ. There can be no accounting for taste.
To tell the truth, once you got past the outfits, I never warmed to Kate’s music. And Rita could never be tarred as being remotely prog. Her ability to create atmosphere lends itself better to film scoring in the proper sense. Anyway, that’s by the by. Like Annika, this girl has a singular vision and she deserves your indulgence. 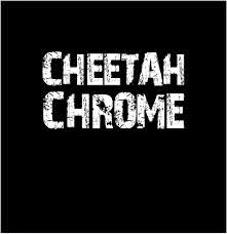 As does her other half – The Legendary Tigerman – who also released a new full length entitled “True”. It was supposed to get a UK release but I’m not sure that happened yet. I ought to check.
Pantones "¿Quién quiere Primavera?" and The Singles “Look How Fast A Heart Can Break” are the outright pop smash hits of the past 12 months. Cheetah Chrome’s EP on Plowboy took care of the Americana aspect of things. “East Side Story” is an example of a New York song that harks back to when that town still had a soul instead of the odd outpost here and there. 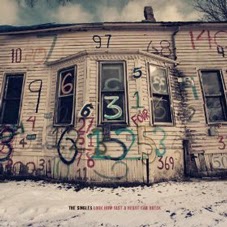 At this point, I semi-promise to be a bit more active starting tomorrow when I’ll maybe haver about a few records that may have gone un-noticed this past wee while. You’ll no doubt have bigger fish to fry but there’s no hurry. I'm not about to leave the bunker until the coast is clear, January 3rd at the earliest.
I don't blame you if you think that it'll all go by the wayside but at this point I have a little faith that it could happen.
Posted by Lindsay Hutton at 2:28 PM No comments:

Merry Christmas from the Weeping Willows (with the one and only Annika Norlin)
Posted by Lindsay Hutton at 7:34 PM No comments:

Happenings Over Seven Days Time Ago... 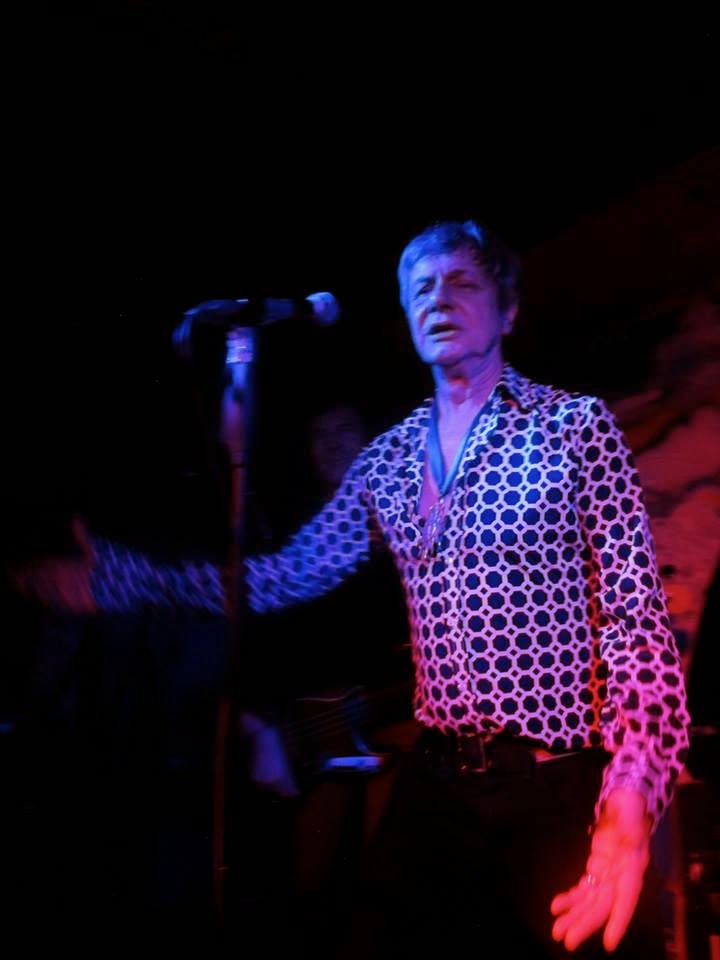 Hardly seems like a couple of days since "The London” schlep never mind over a week. I’ve made it to the holidaze though and the plan is to seldom venture from the midden heid. There are a couple of exceptions but the hatches are as good as battened down.

I should have reported all this by now but I had a wee problem with blogger. It logged me out and it took a couple spins of the block to get back in here. I’ve no idea what happened. It was like getting locked out of the house. Something else that presented itself when I managed to throw my keys into the recycling bin this past Friday, possibly as a result of having made it to the aforementioned finish line. So let’s go back in time a bit to Thursday 11th December and Wreckless Eric’s pitstop in Glasgow. 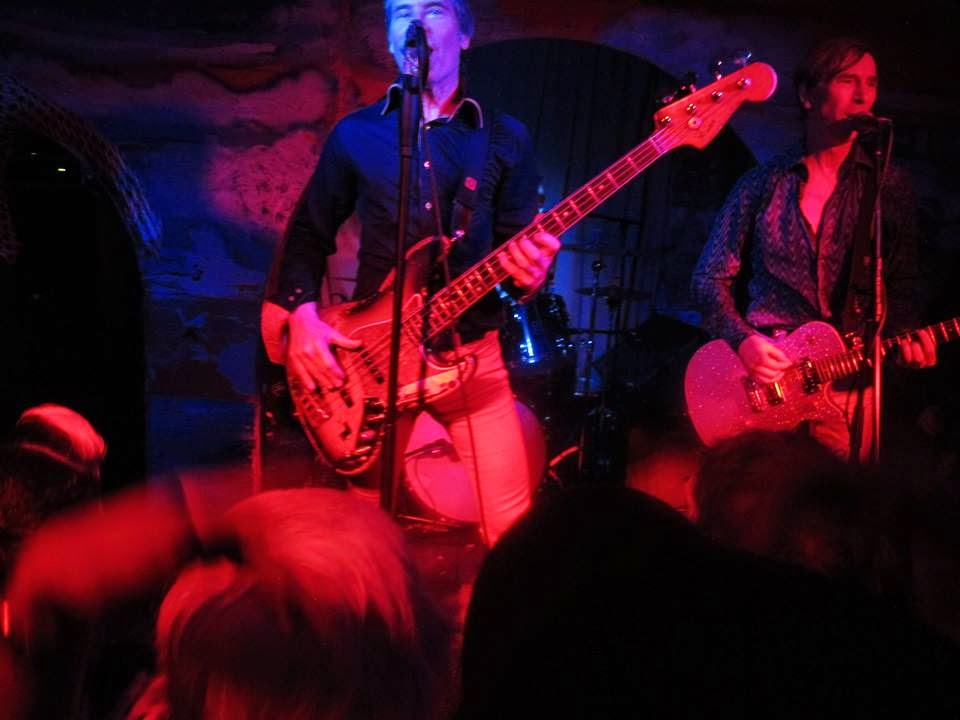 The battle-weary players gave it their all to a sadly depleted audience and were rewarded with having to spend the night in a certain guest house in Renfrew Street. Easily the best ticket in town that night, I guess the festive revelry didn't extend to hearing some rather exceptional music. This made it doubly worse that there was no Elvis Booth session that night.

However, I managed to haul ass to the train and the “weather bomb” that had threatened to upset travel earlier in the week never came to pass. The journey down was damn smooth. A bit like the couple of pints partaken of in The Queens Head prior to heading for Dalston. I made it to the Shacklewell Arms in time for soundcheck. 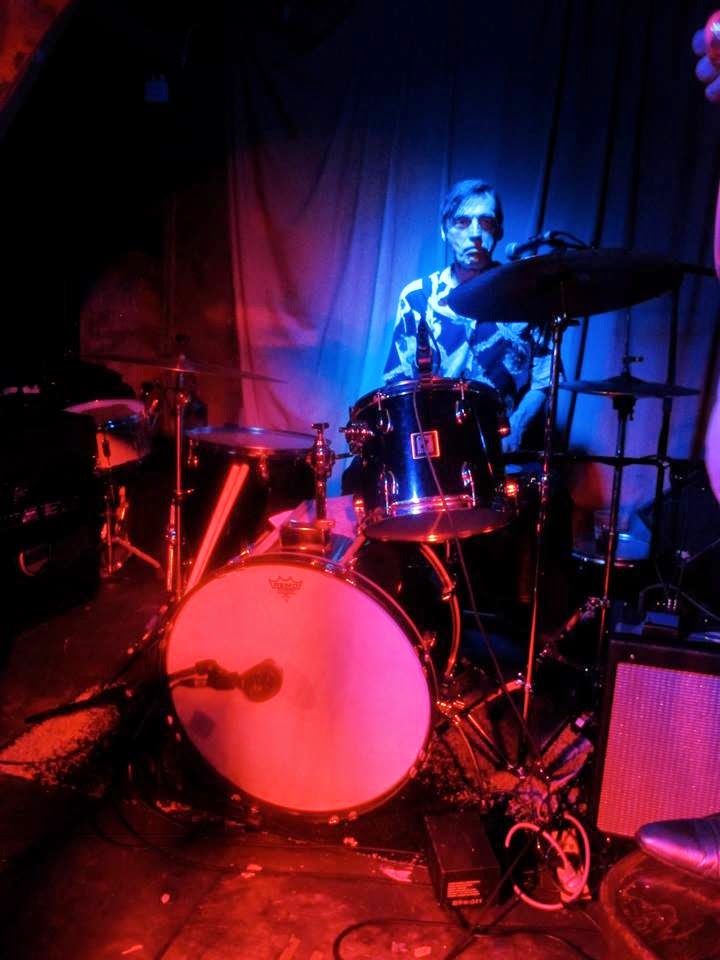 The room seemed smaller than I remembered it, perhaps it’s these new varifocals but it was sure grand to see those Fleshtones. Due to some long-overdue socialising, I managed to miss both support acts but that happens sometimes although on this occasion it wasn’t a cobbled together bill. DWC don’t play that.

A rammed Shack’ got well and truly super-rocked and reinforced that the wrong of the band never having been to Scotland for 31 years + needs to be righted. A plan is in motion to rectify this over the course of 2015 and I’ll keep you posted on this front. Visiting US dignitary, Brother Scott Cornish took the Fleshtones pictures that accompany this missive. 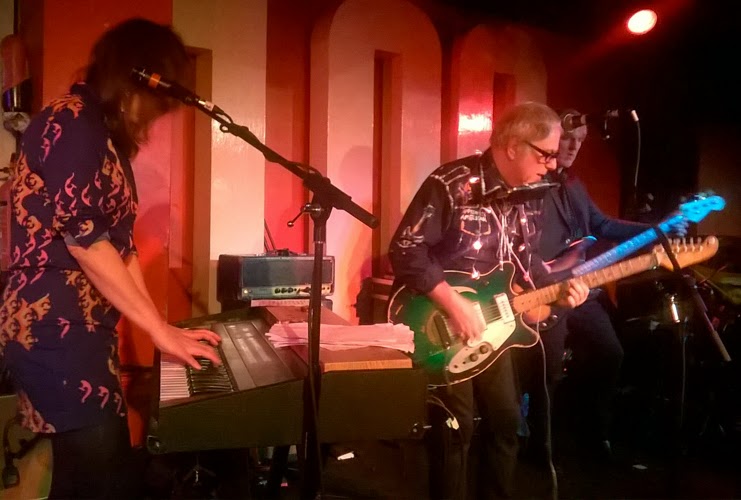 He was also present at the 100 Club on Saturday night where the Wreckless sleigh made its penultimate stop of this semester, a grand triumph in front of a sizeable crowd even although it took place absurdly early., almost to the extent of being a matinee. I don't mind an early start but I believe such a thing is a problem for prospective attendees. Whatever the pros and cons of that, it’s a real treat to see him with a band and I've had the pleasure of seeing this three times over the course of 2014. There was a little glam Creedence seepage this time around that just bolstered the full-blooded renditions of material from his recently revitalised portfolio. "Kilburn Road" was particularly robust in these conditions. I think this was the best Christmas show I’ve seen since The Sensational Alex Harvey Band used to take over the Glasgow Apollo all those moons ago.

Santa Goulden made the scene for the encore to perform the recently-recorded festive paen, "Christmas on the M62". A cautionary tale if ever there was one. 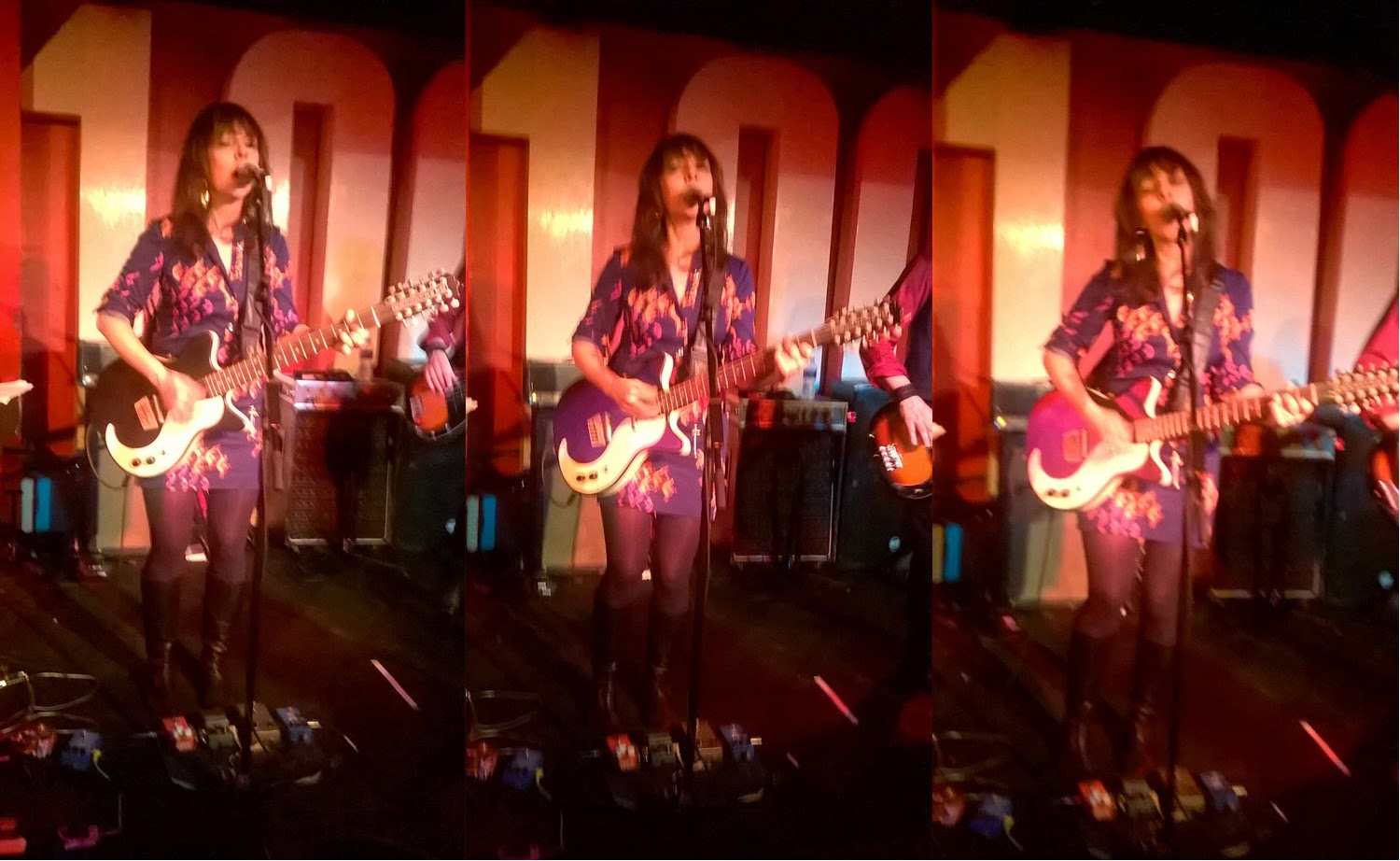 100 club pictures by Me with my ropey phone.
Posted by Lindsay Hutton at 5:29 PM No comments: Posted by Lindsay Hutton at 7:07 PM No comments: 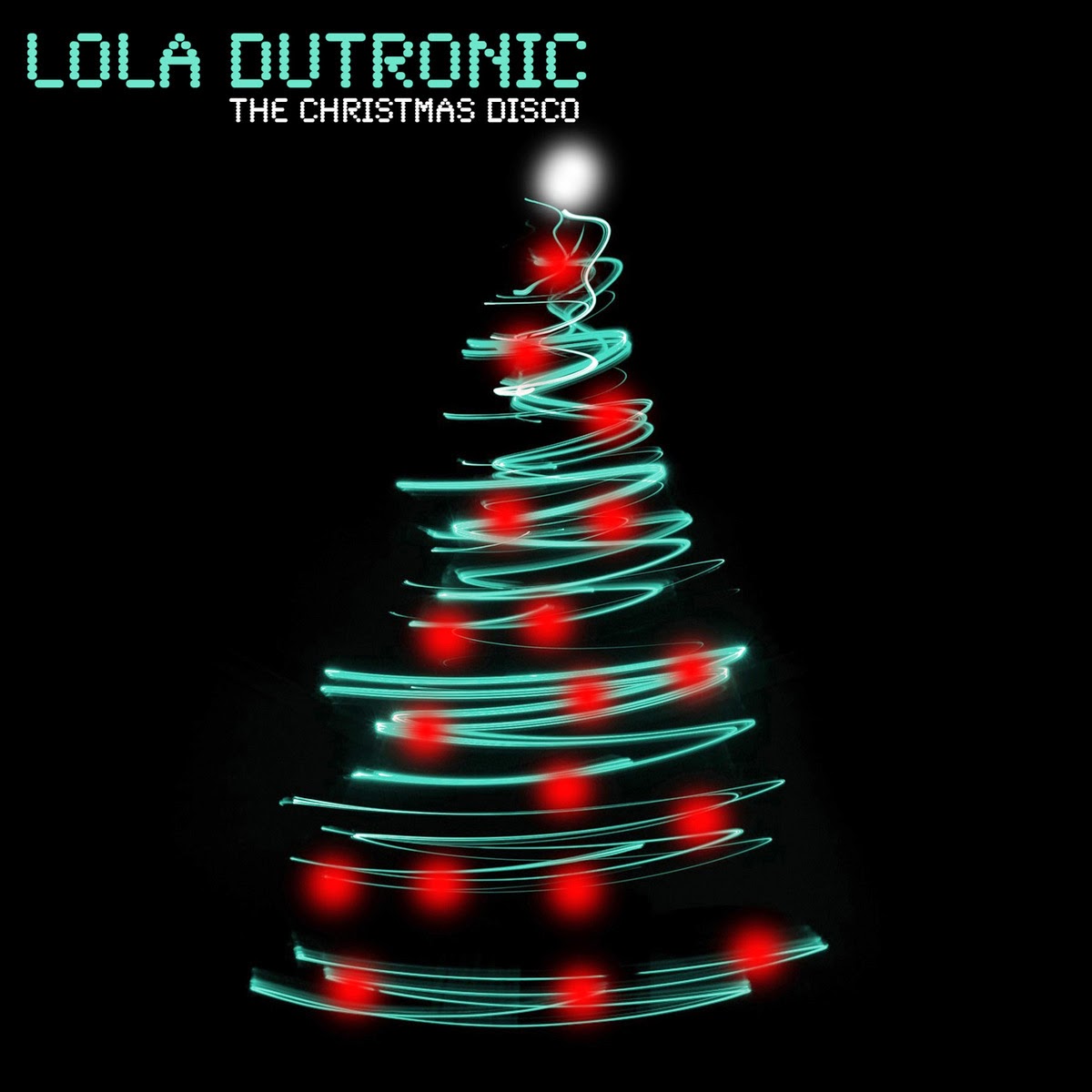 
Thanks to Surf Music Madrid for the tip-off...

Posted by Lindsay Hutton at 8:59 PM No comments:

Posted by Lindsay Hutton at 6:01 PM No comments:

We were hoping this wasn't true but...


Posted by Lindsay Hutton at 9:43 PM No comments: 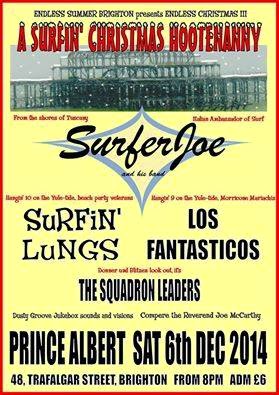