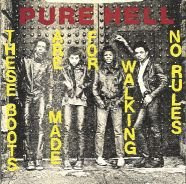 Welfare Records has just released a CD/DVD thingy by legendary US p-rockers Pure Hell. Haven't heard it yet, but it's limited to 1000 copies so you might wanna jump before it evaporates...
Posted by Jeroen Vedder at 9:59 PM No comments:
RIP - Freddie Garrity
Posted by Lindsay Hutton at 2:16 PM 1 comment:
"Hi Kids,

First off, a big thanks to those who you who turned up on saturday at The Birds Nest to see what must go down as one of most enjoyable gigs for eons. As promised, we came up with the goods (and the T-Shirts) and for those of you who have been asking, sorry all the T-shirts are all gone but we'll be getting more............

The next gig is in a few weeks time SUNDAY 11th JUNE at the DUBLIN CASTLE, 94 PARKWAY, CAMDEN TOWN. It's for "LOVE IS HOPE" a charity nite for Cancer the bill is THE MASTERMINDZ, SCANNERS, THE PHOBICS and LUNATIC CRASH. Doors open at 8pm and THE PHOBICS are on at 9:15

It's 6 quid in but you can get in for a fiver if you have a flyer so watch out for em around town and I'll attach some next week. Come along, support a great cause and see some eclectic rock n roll.

We've been invited back to play with ED TUDOR-POLE by special request! We musta done something right at the first gig, or we owe someone money - come on down and find out! The Plough Inn is located directly opposite Wood Street British Rail station, one stop from Walthamstow Central or about 15 minutes from Liverpool Street mainline.Bus 230 (from Wood Green) and W16 (from Leytonstone underground) stop outside the venue. Bus 56, 257, 357, W12, W15,W19 also stop nearby at Whipps Cross Hospital, a short walk away. I'm not sure but I think the gig may be FREE but i'll confirm that! Phew info overload!

The album, often described as the first British punk rock album, and predating the Sex Pistols Never Mind the Bollocks by six months. Scabies and James will perform with Casey Chaos of Amen covering vocals. The current active Damned lineup, including founding members David Vanian and Captain Sensible, will not be part of this performance.

Drummer Rat Scabies had this to say about their choice of frontman:

"Brian and I were quite adamant to have Casey do this gig- there were no other names above his. Amen is the only band I've seen in the last 10 years who are truly punk rock. We dont know what will happen when Casey gets onstage with us- and thats the way we like it."

"To share the stage with Rat And Brian on this night will be engraved into my epitaph as The Most Important Show Of My Life! -- "Damned Damned Damned" changed my life as well as musical history. I'm gonna treat this with the utmost respect for them and their fans. I want to do everything I can to do it justice and make Rat, Brian, Captain, Vanian, Algy and everyone else proud of what they have achieved and celebrate their contribution to punk rock and the legacy that they left . To say that I am humbled and honored is inappropriate. I am ready to slash my throat at the altar of The Damned in dedication to all the lives they changed. I am ready to destroy"

Tickets for the event which, due to the size of the venue, will be obscenely limited are available strictly by post only (ltd to 4 tickets per application). The address for postal applications is:

Well Kids, get cracking (ask a grown up to help with difficult spellings) There will be more soon so watch this space!

The Stripchords are pleased to announce a brace of London live shows, on Friday May 26th & Saturday 27th - now with the added attraction of live go-go dancers Ms Lager-Shandy and Mizz Stephanie!

Friday night will see The Stripchords take their patented tits'n'twang combination, plus live go-go action, to the stage of London's historic 100 Club, where they'll be playing with Stoke-On-Trent's soul sensations, This Is Seb Clark, at a Club Bang! Bang! bash, which will also feature top DJ Dave Edwards.

Saturday night will see The Stripchords' roadshow, plus the Sonic Reducer Tag Team DJs, play a double-header with former Flamin' Groovies linchpin Chris Wilson & His Famous Groovin' Flames, an all-star combo featuring Scientists, Barracudas, Silver Chapter and Mean Vincent members, at the hippest night in East London, namely Stephen and Ali's What's Cookin' in Leytonstone - and it's FREE to get in! Expect a riotous soiree, with Mr Wilson and chums dispensing rip-roaring versions of such 'Groovies classics as Shake Some Action, Slow Death, You Tore Me Down, and Let Me Rock ...

For downloadable Stripchords action, and all other upcoming news, check out ...

See ya at the bar! 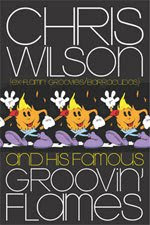 Saturday May 27th
Chris Wilson & His Famous Groovin' Flames & The Stripchords plus Sonic Reducer Tag Team DJs What's Cookin' @ The Sheepwalk, 692 High Road Leytonstone, London, E11 3AA (opp Leytonstone Tube, Central Line) 7.30pm FREE
Posted by Lindsay Hutton at 11:22 AM No comments:
Back to earth with a sharp dunt after last weekend's escapade then with a brief reprieve in the shape of Dan Penn and Spooner Oldham at The Arches in Glasgow last night. I say reprieve but it wasn’t a patch on the last time I saw them. That wasn’t down to the act but rather the mix of the venue and the audience. Why the fuck do people pay money for a ticket and gibber all through the show? The Arches are directly below Glasgow Central Station so everytime a train goes overhead it rumbles through a song. Now that might be fine if it’s a full band but something like this that requires intimacy and attention doesn’t fare well in such circumstances. I’ll take the sound of the trains over the ignorant gabbing bastards anyday though. Thing is that you’re farting against thunder if you try them all to clam up. You’d be there all night and it can get ugly. I’d have thought that the audience being mainly more “mature” they’d value a visit by legends like these. That they’d be a little more reverential. Hell that they should shut the fuck up for an hour or so? Too much to ask or expect? I guess so.

Things have taken a dive ala the stock market but it doesn't feel much like a "correction". More a swift kick in the bollocks. Anyway, the wires are all agog with the news that The Cramps (with Bill Bateman) are headed for Europe in August. You can catch up with the dates here and no, I won't be in attendance at any of them but thanks for asking. It's good to hear that they're active at least. Who knows, maybe there's a dvd release or something to promote but then again perhaps not. Anyway, their public is moist with anticipation. I'm going to try and get to grips with the backlog here today before I settle down to cheer on Finland's LORDI in the Eurovision tomorrow and their "Hard Rock Hallelujah" entry. Way off the daftometer and worthy of a phone or web vote even. If I could text I'd even consider that. Life in the fast lane at the cutting edge of entertainment.

However while you're at Youtube, check out the scopitonetastic BMX Bandits clip on Youtube for “I’m Still Hungry”. More through the course of today, gig news, recent releases and who knows what else. First though, I have to catch up with The Sopranos. Only two episodes to go after these until the final eight that begin during January 2007. Cannae help trouble...
Posted by Lindsay Hutton at 10:08 AM No comments: 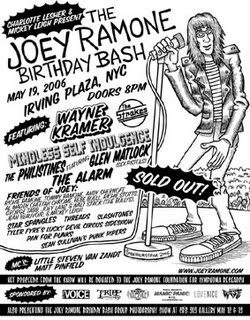 I know, this is taking place even as I type. I know also that the boundaries of good taste are being stretched by some of the acts on the bill but it's for a worthy cause. I hope they'll play "Dancing With Joey Ramone" during the proceedings at some point. Plus the old guard that fought in the punk rock wars with the great man, all together in one place for one night per year only. Messrs (Andy) Shernoff and (Cheetah) Chrome in particular, we salute youse!

Thanks to HT for the jpeg.
Posted by Lindsay Hutton at 1:34 AM No comments:
Newer Posts Older Posts Home
Subscribe to: Posts (Atom)