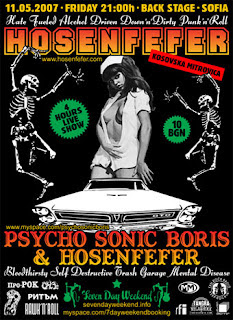 Posted by Lindsay Hutton at 8:31 PM No comments:

You may need to wear a helmet and body armour for protection but you don’t want to miss the glorious, physical insanity of a King Brothers performance. From Osaka, Japan, the King Brothers combine the elements of every vital era of rock ‘n' roll music into one reverb drenched ball of sound that will make your jaw drop…or break (depending on how close you’re standing!). This is very wild music and they take it very seriously. The King Brothers have toured Europe, the US and of course Japan leaving a trail of blind worshippers in their wake. Jon Spencer of the Blues Explosion (with whom they’ve toured twice) produced their album “6 x 3”. Now it’s Australia and New Zealand’s chance to witness what all the fuss is about.

In-Fidelity Records is releasing the King Brothers’ mighty album, Blues, in time for the tour. It’s a brutal, take-no-prisoners explosion of guitar and drums and vocals that leaves speaker cones shredded and begging for mercy.

As an added tour bonus, the album comes with a bonus DVD of an entire King Brothers live show (plus two video clips).

The KING BROTHERS are the new face of rock n' roll music.