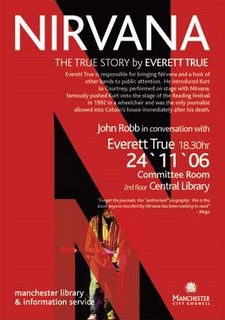 The Rock Journalist who introduced Kurt to Courtney will be in conversation at Central Library Find out what really happened when Kurt Cobain met Courtney Love from the man that introduced them. Rock journalist Everett True will be in conversation with journalist John Robb to talk about his book Nirvana: The True Story.
Everett True is responsible for bringing Nirvana to the attention of the masses and it was he who introduced frontman Kurt Cobain to Courtney Love at a Butthole Surfers gig in 1991. True started out writing a fanzine called The Legend and contributed to NME and went on to become Assistant Editor of Melody Maker and Editor of Vox. It was through his work with the British music press that he was to befriend the late Kurt Cobain.
He travelled to Seattle in 1989 to cover Sub Pop records and what was then becoming known as Grunge. He wrote about Mudhoney, Sonic Youth, Pavement and the Lemonheads among others and gained a reputation for dishing the dirt. However he was also a friend to many of the musicians and particularly Kurt Cobain, who committed suicide in April 1994. True performed with Nirvana and is known for the fact that he pushed Kurt Cobain on stage in a wheelchair at the Reading Festival in 1992. He is also the only journalist who was allowed into Cobain's house immediately after his death. He is held in high regard by many music fans and journalists alike and has written books on The Ramones and The White Stripes. Councillor Mark Hackett, executive member for culture and leisure at Manchester City Council said: "Central Library is a great venue for authors, journalists and poets to come and share their work with a captive audience. I am sure that fans of Everett True and the music he has written about will find this event very informative and entertaining. It is certainly one not to miss for fans of Nirvana."
To find out more about the event or the Henry Watson Music Library
call Steve Shepherd on 0161 234 1976.
Just incase you don't read the "comments"... this message came in:
"I'll also be in Edinburgh and Glasgow the following two days -
Saturday 25th Eve 5pm – Edinburgh Forest Café 0131 220 4538 www.theforest.org.uk
Sunday 26th 11:00 am at Hitherto/Tinderbox
Unit 4, McIntyre Hogg Building, 14/1 Ingram St, Glasgow".
Posted by Lindsay Hutton at 6:01 PM 1 comment: 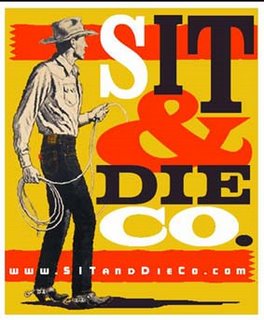 "Greetings Friend,
Susquehanna Industrial Tool & Die Co. heads uptown this weekend -- in a return to the quaint Riverdale section of the Bronx for the monthly "Riverdale Round-Up"! The setting is An Beal Bocht Cafe, a warm and friendly Irish bar that serves up both a cold pint and a hot sheperd's pie, and your singin' "Round-Up" host is Karen Hudson, so join us, won't you?
SATURDAY, NOVEMBER 11th / "RIVERDALE ROUND-UP" / An Beal Bocht Cafe / www.AnBealBochtCafe.com /
445 West 238th Street (between Waldo and Greystone) / Show starts at 9:30, with SIT & Die Co. sets at 10:00 and 11:00 / No cover charge! /
Quite truly yours, Michael
Susquehanna Industrial Tool & Die Co.
"Ballads, Boogies & Blues"
www.SITandDieCo.com
Posted by Lindsay Hutton at 6:35 AM No comments:
Newer Posts Older Posts Home
Subscribe to: Posts (Atom)