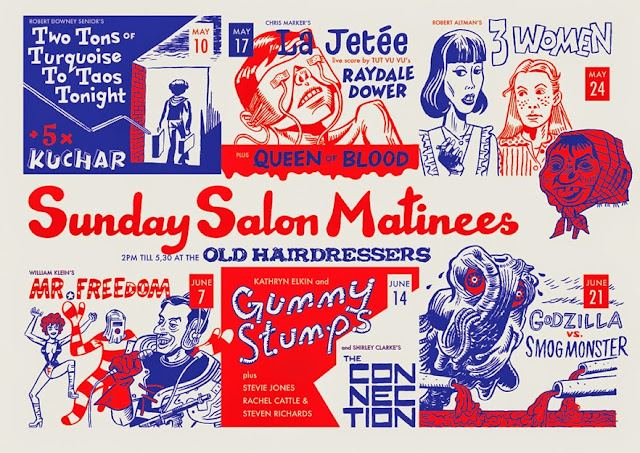 A series of cabaret style events presided over by Marc Baines and Rob Churm: a splurge of film, performance, projections, musical interludes and good times.

Sunday May 17th: La Jetée + Raydale Dower
Chris Marker’s apocalyptic time travel rumination LA JETEE (France 1962) occupies a special place of its own in film history and was the inspiration for Terry Gilliam’s Twelve Monkeys not to mention a zillion art school films. For this screening Marker’s startling images are accompanied by a newly written synth and clarinet score by Tut Vu Vu’s Raydale Dower. In a schlockier vein Curtis Harrington (Kenneth Anger’s cameraman and author of Nice Guys Don’t Work In Hollywood) brings us QUEEN OF BLOOD (USA 1966), a tale of migrant rescue and intergalactic vampires. The film utilises gorgeous footage of Russian space hardware and special effects and the acting flair of John Saxon and Dennis Hopper. Intermission music of a space age variety from Delia Derbyshire, Sun Ra Arkestra, Gil Melle, Devo, Esquivel, Raymond Scott, Stereolab and like that...

Sunday May 24th: Robert Altman / Jane Elliot
Robert Altman’s strange, unsettling and dream-like THREE WOMEN (USA 1977) ranges between desert expanses and confined apartment spaces and boasts extraordinary performances from Sissy Spacek (Carrie) and Shelley Duvall (The Shining). In the wake of a life changing incident health spa workers Pinky Rose (Spacek) and Millie (Duvall) find their relationship with each other shifts and alters in unexpected ways. Also showing: William Peter’s A CLASS DIVIDED (USA 1985) documenting a social experiment teacher Jane Elliot developed in the 1960s for a 3rd Grade  class in Iowa. Segregated by eye colour, on day one blue eyed children are privileged over green eyed children. The next day the roles are reversed and the sometime surprising consequences are observed and disected. A fascinating study of how power and authority exploit discrimination.

Sunday June 21st: Smog Monster / Tanaami / DAM artists
The 11th entry in the original series of Godzilla films is also one of the weirdest and most fun. Yoshimitsu Banno takes over directing from Ishiro Honda for GODZILLA vs THE SMOG MONSTER (AKA Godzilla vs Hedorah) (Japan 1971), an ecological disaster movie wrapped in gogo dancing, stylish animation that demonstrates questionable scientific theories and the inevitable men in rubber suits batting each other from pillar to post. Taking their name from a previous Godzilla film, the Detroit art and music collective Destroy All Monsters (formed 1973), was the early stomping ground of artists Mike Kelley; Jim Shaw; Carey Loren and Niagara. Their music soundtracks Loren’s SHAKE A LIZARD’S TAIL (USA 1995), a wild montage of cable ads, dance offs and b-movie clips. Plus: a handful of short animations by Japanese pop artist KEIICHI TANAAMI (Japan 200 - 2008).
Posted by Lindsay Hutton at 1:17 PM No comments:
Newer Posts Older Posts Home
Subscribe to: Posts (Atom)